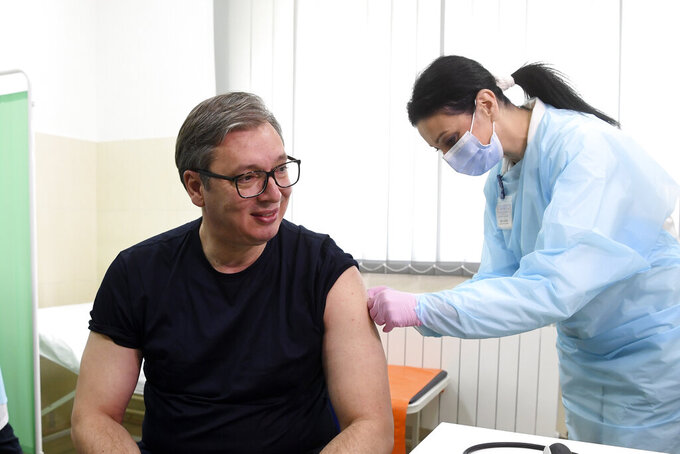 BELGRADE, Serbia (AP) — Serbian President Aleksandar Vucic finally rolled up his sleeve for a coronavirus vaccine Tuesday, seeking to encourage his country's increasingly skeptical citizens to get the shots themselves.

“I received the vaccine, and I feel great,” Vucic said on his Instagram page. “Thank you our great health workers. Thank you our Chinese brothers.”

The populist Serbian president, who rarely wears a protective mask during his frequent public appearances, had promised for months to get vaccinated but found different reasons to postpone the event.

The delay prompted speculation on social media that Vucic was afraid of injection needles, that he did not trust the vaccines or that he had been vaccinated secretly months ago.

Serbia has one of the highest COVID-19 inoculation rates in Europe, mainly thanks to the government’s large purchases of the Sinopharm vaccine. The Balkan nation also is using the Russian Sputnik V vaccine and those developed by Pfizer-BioNTech and Oxford-AstraZeneca.

Some 1.5 million of Serbia’s 7 million people have received at least one vaccine dose so far, but the country has seen a recent decline in residents signing up for shots.

Vucic has taken most of the credit for the successful vaccination campaign, which he linked to his “friendly” relations with Chinese President Xi Jinping and Russian President Vladimir Putin. The Serbian leader has said Putin personally helped Serbia get emergency supplies of Sputnik V.

Although Serbia is formally seeking European Union membership, Vucic has pushed the country closer to China and Russia.

Serbia was the first European country to approve and start using both the Sinopharm and Sputnik V vaccines. EU drug regulators have not yet authorized the use of those vaccines.

Thousands of vaccine-seekers from neighboring countries flocked to Belgrade last month after authorities offered free jabs to all foreigners who showed up. The visitors all received doses of the AstraZeneca vaccine that were at risk of going to waste once they expired due to few Serbs choosing to use the British-Swedish drug maker's product.

Serbia has reported about 5,500 virus-related deaths in the pandemic, and daily confirmed cases and deaths remain high despite the vaccination campaign.