Serie A goalscorers take a knee in league blighted by racism 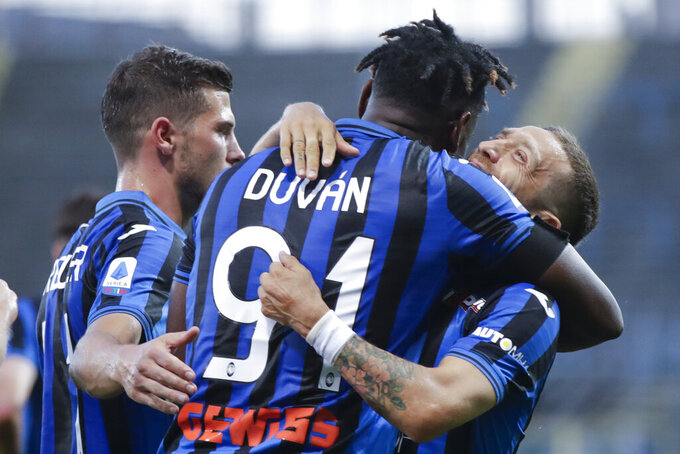 Atalanta's Duvan Zapata celebrates with his teammate Papu Gomez, right, after scoring his side's fourth goal during the Serie A soccer match between Atalanta and Sassuolo at the Gewiss Stadium in Bergamo, Italy, Sunday, June 21, 2020. Atalanta is playing its first match in Bergamo since easing of lockdown measures, in the area that has been the epicenter of the hardest-hit province of Italy's hardest-hit region, Lombardy, the site of hundreds of COVID-19 deaths. (AP Photo/Luca Bruno)

MILAN (AP) — When Serie A goalscorers Romelu Lukaku and Nicolas Nkoulou marked their goals at the weekend by taking a knee it was a particularly powerful gesture in a league that has often been blighted by racism.

Nkoulou did so on Saturday after scoring the first Serie A goal in 103 days as soccer resumed in the country after it was halted during the coronavirus pandemic. Inter Milan forward Romelu Lukaku emulated his Torino counterpart the following day.

Both players are Black.

Lukaku later posted a photo of the moment on social media with the words: “This one is for all the people who’s fighting for injustice. I am with you.”

With no fans allowed in the stadiums there was no risk that either player would be subjected to the racist chants that frequently occurred during the first half of the Serie A season.

Brescia striker Mario Balotelli threatened to leave the field during one match in November because of the chants and another game had to be temporarily halted after he was similarly abused.

Offensive chants had also been aimed at Lukaku, Franck Kessie, Dalbert Henrique, Miralem Pjanic, Ronaldo Vieira and Kalidou Koulibaly. All of the players targeted — except for Pjanic, who is Bosnian — are Black.

Taking a knee has come to be recognized as a symbolic act in opposing racism and police violence and has been widely used by people worldwide protesting the death of George Floyd who died on May 25 after a Minneapolis police officer pressed his knee into his neck for nearly eight minutes.

It gained momentum in 2016 when American football player Colin Kaepernick took the knee during the national anthem before a game to protest racism and police bruality.

“When I scored I immediately thought of my brother Floyd who is important to me,” Nkoulou said.

While some teams are showing signs of rust from the three-month shutdown, Atalanta started again right where it left off by hitting four past Sassuolo.

It had been 103 days since Atalanta scored four in its last outing at Valencia, and 112 since it put seven past Lecce in its previous Serie A match.

Atalanta has scored 74 goals in 26 Serie A matches. Its average of 2.85 goals a game is the highest in the league for 70 years.

“All sports people are in love with Atalanta,” said former Italy coach Marcello Lippi. “The team has become the girlfriend of all Italians, they are all in love with how the team works, with how they play, always in attack, always aggressive and creative.”

The 4-1 result also had an element of poignancy as it was the same scoreline as the first leg of its Champions League match against Valencia. Many experts have pointed to that match on Feb. 19 in Milan as one of the biggest reasons why the virus was so deadly in Bergamo. The match has been dubbed “Game Zero” by the local media.

More than 16,000 people have died from the virus in the Lombardy region where Bergamo is located. Atalanta is based in the small city, which was one of the epicenters of the outbreak.

Inter has often struggled to maintain its advantage after taking the lead in matches this season and it almost did so again on Sunday.

The Nerazzurri have lost 13 points this season from leading positions and came close to throwing away a two-goal advantage before holding on to beat Sampdoria 2-1 and cut the gap to league leader Juventus to six points.

Inter’s inability to hold onto a lead has also cost it dearly in the Champions League, where it was eliminated at the group stage, and in the Italian Cup when it lost the semifinal to eventual winner Napoli despite going in front early in the second leg.

“We should have finished the game off sooner,” Inter coach Antonio Conte said after the Samp match. “We had plenty of chances but didn’t really wrap up the win. We have to be more clinical.”

“We have 12 games left and we won’t have any room to slip up because we’re chasing. We’ve worked so hard, both tactically and physically, and we want to take our chances. I hope that games like tonight’s allow us to understand where we went wrong and help us to grow.”

Lukaku was more succinct, although he perhaps should have chosen a better turn of phrase.

He said: “We have 12 finals left. For us every match is important, it’s life or death.”

Nealy 35,000 people have died with coronavirus in Italy.