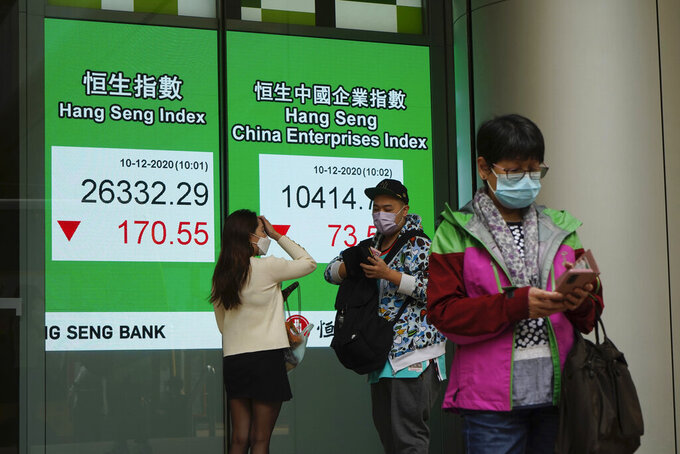 Stocks were mostly lower Thursday in Asia after weakness in technology companies’ shares led an overnight decline on Wall Street.

Benchmarks fell in Tokyo, Hong Kong and Sydney but edged higher in Shanghai.

As coronavirus vaccines move closer to distribution, markets have been pushing higher on hopes the pandemic will begin to ease, allowing economies to recover.

A vaccine from Pfizer and German partner BioNTech, which is already in use in the U.K., is on track for a positive review and potential approval in the U.S. within the next week. The Food and Drug Administration will also consider a vaccine developed by Moderna later this month.

The recent surge in coronavirus cases and tighter restrictions on businesses over the last few weeks have again raised the importance of a vaccine for beaten down businesses.

The rollout of vaccines in Asia has been slower. In many countries, outbreaks have waxed and waned as governments seek a balance between pandemic precautions and economic exigency.

Australia's S&P/ASX 200 declined 0.6% to 6,687.00 after China’s government has announced additional import taxes on wine from Australia, stepping up pressure on its government amid a bitter diplomatic conflict over the coronavirus, territorial disputes and other irritants.

The Chinese Ministry of Commerce said an investigation concluded Australia improperly subsidizes wine exports, hurting Chinese producers. It imposed a countervailing tax of 6.3% to 6.4%. China, Australia’s biggest export market, already has effectively blocked imports of Australian wine by imposing taxes of more than 200%. Beijing also has blocked imports of Australian beef, wheat and other goods since Australia’s government expressed support for an independent investigation into the origins of the coronavirus.

On Wednesday, the S&P 500 index fell 0.8% to 3,672.82, as losses in technology companies outweighed gains in industrial, energy and materials stocks. The benchmark index is still up 1.4% for the month after climbing to record highs four times in the past two weeks.

Investors still have an appetite for IPO’s as meal delivery service DoorDash soared 85.8% in its market debut. The company has been one of the beneficiaries of the stay-at-home economy as more people shop and order food from their homes.

More economic damage may be in store over the next few months and investors are still closely watching Washington for any developments on another shot of stimulus for people, businesses and state governments. Congress is still divided over the size and scope of any new package and the Trump administration has added to the potential plans with a new $916 billion proposal.

In other trading, U.S. benchmark crude oil gained 29 cents to $45.81 per barrel in electronic trading on the New York Mercantile Exchange. It lost 8 cents to $45.52 per barrel on Wednesday.

Brent crude, the international standard, added 18 cents to $49.04 per barrel.