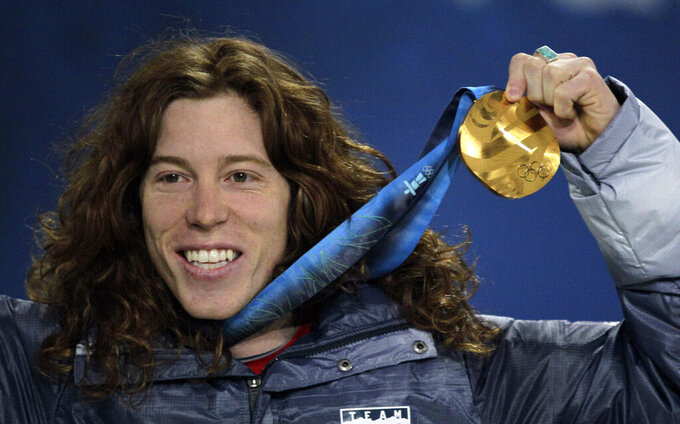 FILE - United States' gold medalist Shaun White reacts during the men's halfpipe medal ceremony at the Vancouver 2010 Olympics in Vancouver, British Columbia, Thursday, Feb. 18, 2010. The Beijing Olympics will be the fifth Olympics for the three-time gold medalist. And the last Olympics for the 35-year-old — get this — elder-statesman who is now more than double the age of some of the riders he goes against. (AP Photo/Jae C. Hong, File)

BEIJING (AP) — The Flying Tomato wants this to be his final takeoff.

Three-time snowboarding gold medalist Shaun White made it clear Saturday that the Beijing Games won’t just be his final Olympics, the 35-year-old American plans to retire from the sport he put on the international map after the halfpipe medal round next week.

“In my mind, I’ve decided this will be my last competition,” he said.

White has been a transcendent force for snowboarding, its most recognizable face for nearly two decades — and not just because of the mop of red hair that inspired his nickname.

Those locks have since been chopped, and White is now an elder statesman for the sport, hobbling into his fifth Olympics after a season marred by an ankle injury, a bout with COVID-19, a late unscheduled trip to Switzerland to secure his Olympic spot and, most recently, a training plan that got thrown off schedule during his stay in Colorado in January.

“I’m sort of pinching myself, with how lucky I am to still be here at this age,” he said during a reflective, 45-minute news conference.

White won gold in his Olympic debut in 2006, just the third time halfpipe snowboarding was held at the Winter Games. The sport boomed in popularity with him at the forefront, and he won gold again in 2010 and 2018. He also has 15 X-Games golds — 13 in snowboarding and two as a skateboarder.

White will hardly be a favorite for a fourth halfpipe gold when the finals are held Friday. Ayumu Hirano of Japan, who finished second to White in 2018, became the first to land a triple cork in competition in December, and the three-flip trick probably won’t be in White’s run.

White said he’s toggling between trying to enjoy every moment of the last big contest week of his life and knowing there is work to do when the halfpipe opens for training Sunday.

He said he decided he was ready to be done during the buildup to the Beijing Games, a moment that crystalized when he got lost on a mountain during a soul-sucking training stop in Austria in November

“A sad and surreal moment,” he said. “But joyous, as well. I kind of reflected on things I’ve done and looked at the sun going down and went, ‘Wow, next time I’m here, I won’t be stressed about learning tricks or worried about some competition thing.’”

Norway is sailing toward a second straight turn atop the Winter Games medal count after a golden start.

Cross-country skier Therese Johaug won the first gold medal of the Beijing Olympics in the women’s 15-kilometer skiathlon, and Johannes Thingnes Boe moved ahead of his French and Russian rivals in the final meters of the mixed relay to give Norway gold in the first biathlon race.

Johaug fought wind and frigid temperatures to ski away from a chase group of four. She has 10 world championship titles but had never before won an individual Olympic gold medal.

Boe, Quentin Fillon Maillet of France and Eduard Latypov of the Russian team left the range close together after the last round of shooting and raced for position until the final stretch, when Boe sprinted for the win.

Norway, which came into the relay as the World Cup leader, also got strong performances from Marte Olsbu Roeiseland and Tarjei Boe. But they trailed early in the race when Tiril Eckhoff struggled on the range.

China earned its first gold medal of the Beijing Games in the short track speedskating mixed team relay in the event’s Olympic debut.

Wu Dajing edged Pietro Sighel of Italy by .016 seconds — or half a skate blade — to claim gold. Hungary earned bronze.

China was the gold-medal favorite coming in, having led the World Cup standings this season.

Irene Schouten gave the mighty Dutch a gold medal in the first speedskating event of the Beijing Games, breaking a 20-year-old Olympic record in the women’s 3,000 meters.

Skating in the last of 10 pairs, Schouten turned in a blazing final lap to post a winning time of 3 minutes, 56.93 seconds. That broke the previous Olympic mark of 3:57.70, set by Germany’s Claudia Pechstein at the 2002 Salt Lake City Games.

In a fitting bookend to the event, Pechstein skated in the opening pair to become the oldest female athlete in Olympic history at 49. The German finished last, more than 20 seconds behind the winner.

NEW KING OF THE HILL

Walter Wallberg of Sweden upset “The King” to take home the gold medal in the men’s moguls.

Wallberg looked almost in shock when his score of 83.23 flashed on the board, edging defending Olympic champion Mikael Kingsbury of Canada on a bitterly cold night. Wallberg picked up points for his speed over the smooth and technical skiing style of Kingsbury, whose nickname is the “King of Moguls.”

This was Wallberg’s first major win. The 21-year-old Swede has never even won a World Cup event.