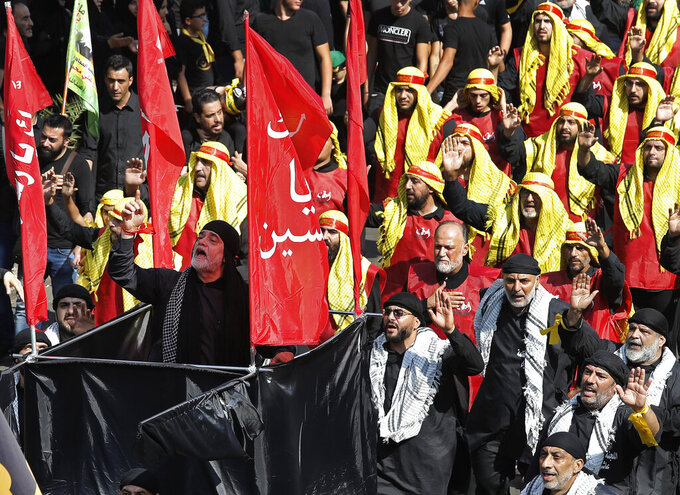 FILE - In this Sept. 10, 2019, file photo, Lebanese Shiite supporters of the Iranian-backed Hezbollah group raise their fists and chant slogans during Ashoura, the Shiite Muslim commemoration marking the death of Hussein, the grandson of the Prophet Muhammad, in present-day Iraq in the seventh century, Tuesday, Sept. 10, 2019, in Beirut, Lebanon. Shiites mark Ashoura, the 10th day of the month of Muharram, to commemorate the Battle of Karbala when Imam Hussein, a grandson of Prophet Muhammad, was killed. (AP Photo/Hussein Malla, File) Shiite Muslims are observing the solemn holy day of Ashoura that they typically mark with large, mournful gatherings, in the shadow of the coronavirus pandemic.

Ashoura commemorates the seventh-century killing of Imam Hussein, the grandson of the Prophet Muhammad, in the Battle of Karbala in present-day Iraq with the army of then Caliph Yazid, to whom Hussein had refused to pledge allegiance.

“At its heart, It’s the story of the sacrifice of an extraordinary religious figure,” said Noor Zaidi, who teaches history at the University of Maryland, Baltimore County and researches Shiite Islam. “It’s (also) the story of familial love between Hussein and those who were with him in Karbala. ...It also has this real, sort of revolutionary component to it," she said.

“What has made it endure so powerfully ... is the fact that it has at its core the ability to meld itself to what, I think, people need to get from it."

The Day of Ashoura falls on the 10th of the Islamic month of Muharram and is preceded by days of commemorations and remembrance. The public expressions of communal mourning are generally associated with Shiites. For many Sunnis, Ashoura is a remembrance of more than one event, including the Moses-led exodus from Egypt.

In Iraq, pilgrims ordinarily converge on the holy city of Karbala, site of the battle and home to a shrine to Imam Hussein.

But with the pandemic, Iraq's top Shiite cleric, Grand Ayatollah Ali al-Sistani, encouraged people to observe the mourning in other ways such as watching online or televised commemorations from home.

Those attending public commemorations must adhere to health guidelines, including social distancing and wearing masks, with caps on the numbers of participants in accordance with the local regulations of different countries, a statement from his office said.

Saif Badr, spokesman for the Iraqi Ministry of Health and Environment, praised al-Sistani's statement and call for adhering to health regulations.

"Our opinion is clear,” said Badr. “Generally speaking, we are against congregations in all their forms, including on religious occasions” due to the pandemic. Some Iraqis are not heeding the call to avoid congregating.

In Pakistan, thousands of minority Shiite Muslims rallied in various parts of the country ahead of tomorrow’s Day of Ashoura amid a decline in coronavirus deaths and infections. In his speech to a gathering of Shiite Muslims in the city of Multan, Foreign Minister Shah Mahmood Qureshi asked people to adhere to social distancing rules when they observe Ashoura. Security forces deployed around Shiite places of worship to help secure public rallies which had been targeted by militant groups in the past.

In interviews with The Associated Press, several Shiite Muslims told of how they are observing commemorations this year.

On a typical day in the mourning period leading up to the Day of Ashoura, Sayyid Sahib al-Yasseri buys rice, meat and other foodstuffs in the mornings for dinners served to those attending nighttime commemorative gatherings.

Clad in black clothes, he and others listen to recitations of the Quran, religious lectures and lamentations. Some bury their faces in their palms as they weep. Mourners rhythmically beat their chests in grief.

“There are tears and heartbreak for Imam Hussein,” al-Yasseri said.

This year the rituals were held outside, he said, and men distributed disposable masks and pumped sanitizer into outstretched hands.

Al-Yasseri wore a mask out of coronavirus considerations but didn’t consider skipping the commemorations.

“If God wants me to get infected, I will,” he said.

Al-Yasseri estimated that about 750 people have been taking part each night in the gathering, fewer than in previous years due to the pandemic.

On Ashoura Day — which in Iraq falls on Sunday — at least one tradition of his will remain unchanged: donating blood.

“I donate to benefit others," al-Yasseri said, "and out of love for Imam Hussein.”

Ashoura comes as Lebanon reels from not only the pandemic but economic hardship and the aftermath of a massive explosion that ripped through its capital this month.

Amid a partial coronavirus lockdown, the two largest Shiite groups in Lebanon, the militant group Hezbollah and the Amal movement of Parliament Speaker Nabih Berri, have urged people to mark Ashoura at home with the help of television and social media.

Yasser Qameh, who for decades in the past attended public gatherings every night during the mourning period, has been watching from home this year.

“I watch it on TV or YouTube — as long as I don’t mingle with people,” Qameh said by phone from his southern Lebanese city, which in normal years is a site of massive Ashoura observations. “The difference is like watching a football match on TV rather than being at the stadium.”

This year, Qameh said, despite a curfew, some people are gathering every night in a city square with masks, temperature checks and plastic chairs spaced out.

Typically, Nabatiyeh’s annual Ashoura ceremonies are attended by tens of thousands of people with some men cutting and beating their heads as blood drips soiling white clothes to symbolize and recall the pain of Imam Hussein. Such scenes are criticized by some Shiite clerics who denounce the ritual.

Qameh is also forsaking another tradition this year. Normally he would help distribute water, juice and a special dish called Harisa - that consists of wheat and chicken or beef - to participants who come from other areas.

In the United States, some Shiite communities are broadcasting commemorations online.

In Hicksville, on New York’s Long Island, Fatima Mukhi-Siwji had been feeling sad that her 10-month-old daughter will miss out on the rituals.

But shortly before the start of Muharram, a number of Shiite Muslims from different communities, including Mukhi-Siwji’s father, teamed up to organize drive-in commemorations to safely mark the occasion, she said.

Held at a movie theater’s outdoor parking lots, they feature scholarly sermons, poetry recitals, chanting and lamentations as families listen from their cars and watch on large screens. Some get out of their cars and watch or engage in chest beating mourning rituals while social distancing, she said.

The daily events have attracted hundreds of cars and, Mukhi-Siwji said, revived a feeling of togetherness she sorely missed.

“It’s such an electrifying experience,” she said. “It goes through your whole body.”