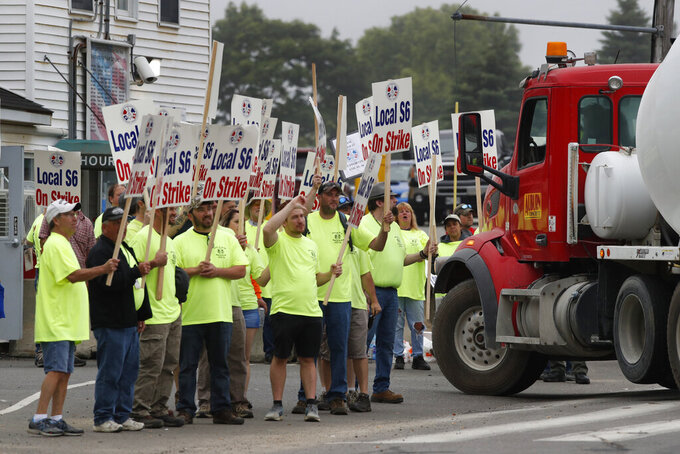 PORTLAND, Maine (AP) — With more than 4,000 workers on strike, Navy shipbuilder Bath Iron Works plans to bring in more subcontractors to join management and existing contractors to try to avoid falling further behind on production, the company's president said Thursday.

The company and Machinists Union Local S6 are also entering into federal mediation next week in hopes of getting back to the bargaining table, President Dirk Lesko said.

The hiring of more subcontractors has been a bone of contention during previous negotiations with workers. But the company must do what it can to prevent further delays in the delivery of destroyers to the Navy, Lesko said.

“First and foremost, the subcontracting that we’re doing does not impact a single job at Bath Iron Works. Not one person will be displaced because of this," he told The Associated Press. “The message that we’re sending the customer is that we’re trying to do the best that we can to build the ships when they need them.”

The president of the union said the expansion of subcontracting is proof that Bath Iron Works is not negotiating in good faith.

“We are outraged that this company would further expand its use of low-wage subcontracting,” said Robert Martinez Jr., International President of the International Association of Machinists and Aerospace Workers. “It’s a slap in the face to more than 4,300 IAM Local S6 shipbuilders who have worked through a pandemic and for generations to make this company successful.”

Word of the increased use of subcontractors came in a memo to workers that said salaried workers, existing contractors and new subcontractors will do everything they can to make progress on ship construction despite the strike.

Shipbuilders went on strike June 22 after overwhelmingly rejecting a contract in dispute that's primarily centered on subcontractors, work rules and seniority while wages and benefits are a secondary concern.

The company’s final offer that was rejected called for a three-year contract with pay raises of 3% in each year.

The pandemic has served as a backdrop for tension between the union and the company on the banks of the Kennebec River. Striking workers lost their company-provided insurance this week, but say they're determined to fight for a fair contract.

Bath Iron Works is one of the Navy’s five largest shipbuilders and one of only two that make destroyers, the workhorse of the fleet. Even before the strike, the shipyard was roughly six months behind on contracts to deliver destroyers to the Navy, which wants warships to be delivered as quickly as possible at a time of growing competition from Russia and China.

Lesko said the subcontractors who are being hired are no substitute for the skilled workers who are on strike. The mediator will meet with both sides next week in hopes of finding common ground to resume negotations, he said.

The union said subcontractors are not the answer.

“The company said they need an answer that will allow them to succeed. The use of subcontractors will not succeed. They need to listen to the workers. They know how to build the ships,” said Local S6 President Chris Wiers.