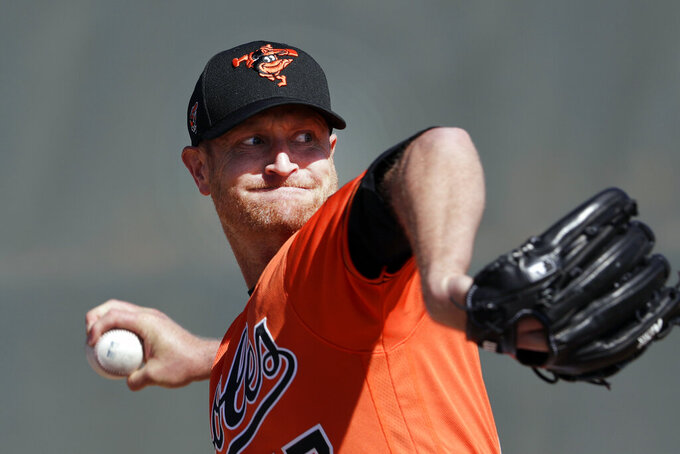 BALTIMORE (AP) — The Baltimore Orioles will attempt to navigate an abbreviated baseball season without their most productive player, a severe shortage of outfielders and a precarious starting rotation.

On March 12, the same day that the coronavirus outbreak brought spring training to an abrupt halt, rising star Trey Mancini underwent colon cancer surgery. After batting .291 with 35 homers and 97 RBIs in 2019 for the last-place Orioles, the 28-year-old outfielder is receiving chemotherapy treatments and is out for the season.

“He was our leader,” young outfielder Austin Hays said. “I’ve never been part of an Orioles locker room that didn’t have him in it. So to not have him around, it’s very strange.”

“Strange” doesn’t even begin to describe a baseball season that begins in late July and lasts only 60 games. The brevity of the schedule means the Orioles will snap their string of successive 100-loss seasons, but the reduction of games and the cancellation of the minor league season will likely slow the major overhaul overseen by second-year general manager Mike Elias.

“It’s definitely a blow,” Elias said. “We wanted so many of our players and prospects to have full seasons. We’re not getting that.”

The loss of Mancini, combined with the absence of Dwight Smith Jr. and the late arrival of Anthony Santander, leaves manager Brandon Hyde with only a handful of outfielders.

Santander finally reported to camp on Tuesday; the club did not provide an explanation. The Orioles have not disclosed the reason for Smith's absence, either.

Hyde hopes Santander can play in the July 24 opener in Boston.

“Tony's a big part of our team, a middle-of-the-order hitter for us, so we're going to try to get him ready as quickly as we possibly can," Hyde said.

Hays, Stevie Wilkerson and DJ Stewart are ready to step in, but there’s very little depth at all three positions.

There’s also a potential problem at shortstop. Newcomer José Iglesias has been bothered by a sore back at camp and backup Richie Martin is on the 60-day injured list with a broken right wrist.

John Means has been named the starting pitcher for opening day. That’s as far as Hyde will go in announcing the five pitchers of an uncertain rotation.

Means is coming off a sensational rookie year in which he earned 12 victories for a team that finished 54-108, 49 games behind the first-place Yankees in the AL East.

Things are murky after that.

Journeyman Wade LeBlanc could get the call in Game 3 and Asher Wojciechowski (4-8 last year) could snag the fourth spot. Tommy Milone (4-10 with Seattle in 2019) or Kohl Stewart (2-2 in nine appearances with Minnesota last year) are candidates for the fifth spot.

The Orioles remain hopeful of receiving a return on a seven-year, $161 million contract that first baseman Chris Davis signed in 2016.

But the 34-year-old added some weight in the offseason and hit well before spring training was cut short.

“He came in with the strong intent to have a good year,” Hyde said. “I know he put in some really good work during the offseason, not only with the swing but also in the weight room.”

COVID-19 is as much a threat to staying on the field as bumps, bruises and breaks.

The Orioles have been operating in two clubhouses, staying six feet apart and eating packaged meals at Camden Yards.

“Our guys understand it,” Hyde said. “We’re reminding each other about masks in the clubhouse and keeping our distancing. That was an adjustment early, but our guys are accustomed to it.”

SPRINT TO THE FINISH

If the season was a marathon instead of a sprint, as the cliché goes, then the Orioles would probably have no chance to be a contender.

“Just because we don’t have the big contracts or the big names, doesn’t mean that every single guy is not trying to win,” Cobb said. “With the 60-game schedule, guys believe that we have a chance. We have some guys who can really turn some heads and surprise people.”