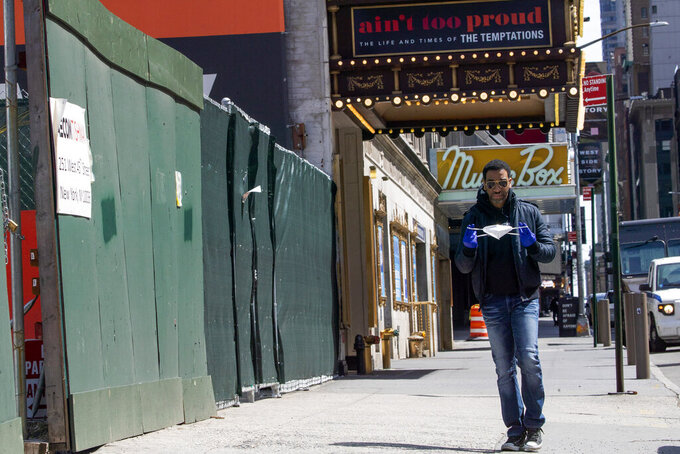 Actor E. Clayton Cornelious poses for a portrait at the Imperial Theatre, Tuesday, April 7, 2020, in New York. The stages are quiet and the seats are empty on Broadway as New York City residents shelter in place to stem the spread of the coronavirus. For Cornelious, being isolated in his Bronx apartment has been difficult. But he and the cast of the hit musical, "Ain't Too Proud: The Life and Times of The Temptations" have been trying to keep each other amused by posting memes and jokes. (AP Photo/Mary Altaffer)

“When this happened, I said, look at the staycation I just got,” said Cornelious, 43, a 20-year theater veteran currently in the hit musical, “Ain't Too Proud: The Life and Times of The Temptations."

But as the weeks have gone on, he admits it’s gotten harder to spend time, alone, in the Bronx apartment.

“I’m in such control of my life usually on an everyday basis," he said. “It’s forcing me to actually be more prayer-minded and maybe get back into my faith a little bit more because if I didn’t, I’d be going a little nutso.”

The Associated Press followed 10 New York City residents on Monday, April 6, as they tried to survive another day in the city assailed by the new coronavirus. For more, read 24 Hours: The Fight for New York.

Cornelious said he and his fellow castmates have been trying to keep each other amused, posting memes and jokes. He’s also done video calls with other friends, including singing sessions with his best friend and working on his theater producing and investing projects.

He’s concerned about what this means for Broadway, when New York reopens.

For him, life these days means a lot of catching up on television shows he doesn’t normally get a chance to see, as well as indulging his inner neat freak to keep his apartment clean.

When this is all over, he hopes it makes a difference in how people treat each other.

“I seem to think that we all will come out of here being a little kinder to people, I think, because we have been isolated so much that now gathering, when we do get a chance to gather, will be special," he said.