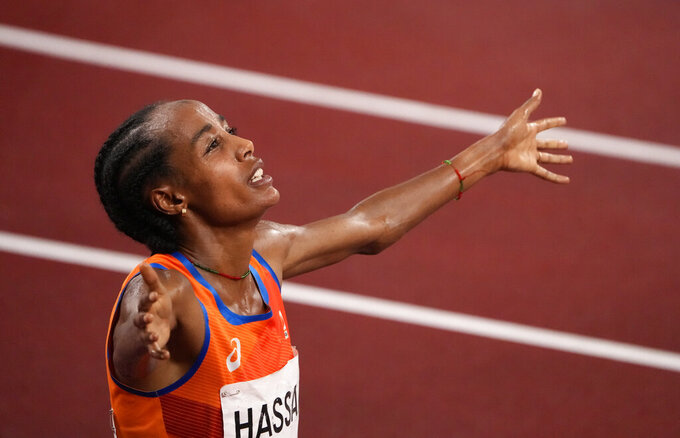 Sifan Hassan, of Netherlands celebrates after winning the gold medal in the final of the women's 5,000-meters at the 2020 Summer Olympics, Monday, Aug. 2, 2021, in Tokyo, Japan. (AP Photo/Charlie Riedel)

TOKYO (AP) — Sifan Hassan is taking distance running at the Olympics back to previous, golden eras by attempting to win not one, not two, but three gold medals at the Tokyo Games.

The Ethiopian-born Hassan, who competes for the Netherlands, has already ticked one of those off with victory in the 5,000 meters.

She'll run in the 1,500-meter final on Friday and the 10,000 final on Saturday, the culmination of a draining schedule of six races in eight hectic days for her in Tokyo.

There is a small group of all-time greats who have won three golds or more in distance events at the Olympics, although no one has ever won the specific 1,500-5,000-10,000 combination that Hassan is chasing.

All-time great Emil Zatopek of the former Czechoslovakia was the last to do a long-distance triple at the 1952 Olympics. Only one other person has come close since.

Zatopek, for many the greatest distance runner ever, won gold medals in the 5,000, 10,000 and, incredibly, the marathon in the space of a week at the 1952 Helsinki Games. When you include the 5,000 preliminaries, Zatopek ran four races in seven days. Some might say a marathon should count for at least four races on its own.

Before him, “Flying Finn” Paavo Nurmi staked a claim to the biggest set when he won five middle- and long-distance golds at the 1924 Paris Olympics. Nurmi won gold and broke Olympic records in the 1,500 and 5,000 meters on the same day and within an hour of each other. He also won the individual cross-country title and was part of two other team golds at that Games.

Lasse Viren, another Finn, completed a second straight 5,000-10,000 double at the 1976 Montreal Olympics but just missed out on three golds when he finished fifth in the marathon.

Since then, the best have been long-distance doubles. Ethiopian teammates Tirunesh Dibaba and Kenenisa Bekele each won the 5,000-10,000 double at the 2008 Beijing Games, and British runner Mo Farah swept those races in 2012 and again in 2016.

But even Usain Bolt never won more than two gold medals in individual events at the same Games.

Hassan was born in Ethiopia but moved to the Netherlands as a refugee when she was 15. Even before she left her country of birth, she was drawn to running at school, she said, because she always had “so much energy.”

She has been around the top level since 2013 but really came to the fore by winning a 1,500-10,000 double at the 2019 world championships, the first time anyone had done that at the worlds.

Her range is ultra-impressive. Hassan is also now the 5,000-meter Olympic champion to go with her 1,500 and 10,000 world titles. She set the 10,000-meter world record in June (it was broken by Ethiopia runner Letesenbet Gidey two days later) and still holds world marks in the mile and 5-kilometer road race.

Hassan's success has come under scrutiny because of her connection to former coach Alberto Salazar, who led the now-defunct Nike Oregon Project and was banned for four years in 2019 for doping-related offenses.

Hassan was one of the athletes who trained under Salazar at the Oregon center. She has denied doping and hasn't failed a test, but the link has taken some of the shine off her achievements. Salazar's ban was announced during those 2019 world championships in Qatar, and Hassan had to dodge a bevy of questions about their association.

“The hardest moment of pressure in my life (was) in Doha and I managed it," she said before the Tokyo Olympics. "I think in Tokyo, it’s going to be OK. It’s not going to be hard.”

Before the Games, The Associated Press picked Hassan for gold in the 10,000 and silvers in the 5,000 and 1,500. She's already exceeded those expectations in the middle race, and her form looks good. She had won every race she's entered in Tokyo, including a crazy-good performance in the 1,500 heats when she was tripped up by another runner at the start of the last lap. She picked herself up near the back of the field, chased down the leaders and still won.

The runner with the best chance to stop the sweep would be Gidey, the current world-record holder in the 10,000. That race is Saturday, the last day of track at the Olympics.

Regardless of the race, Hassan almost always chooses to sit near the back half of the field — in the shorter races, sometimes at the very back — until the final lap. She then unleashes her speed to overhaul all her competitors. So far, it's worked every time in Tokyo.