Signs of conditioning issues concern for some ACC schools 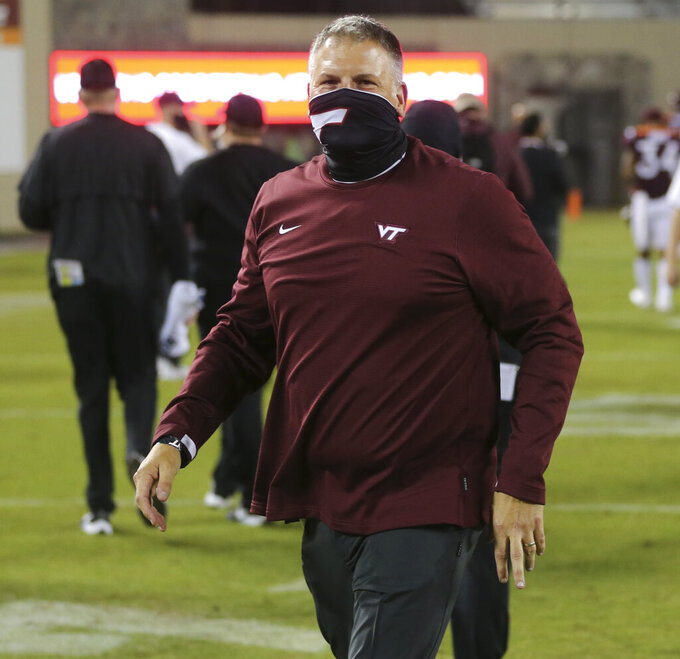 Virginia Tech’s twice-delayed season-opener could hardly have started any better.

By the middle of the first quarter, the Hokies led North Carolina State 17-0 despite being without almost two dozen players for COVID-19 and injury-related issues, as well as two assistant coaches. The coronavirus had postponed the start of their season by two weeks.

But then Justin Fuente saw a new challenge, one that coaches throughout the Atlantic Coast Conference, as well as the rest of college football, may have to contend with in the early going: fatigue from a lack of conditioning.

“We got off to a good start. I feel like we kind of lost our wind, which is what I was worried about,” Fuente said after a 45-24 victory. The coronavirus had caused the Hokies to postpone a game with Virginia, pause practice for four days and juggle availabilities.

“We hadn’t played, practice had been limited for the last several weeks. I was really worried about our conditioning and it was pretty evident," Fuente said. “I mean, we got out there, got it rolling pretty quick and then it was like we were out of breath on both sides of the ball."

For schools choosing to play this fall, the reality is most teams didn’t have a traditional — or in some cases, any — spring practice. During the spring and early summer, when players typically would have been on campus working with strength and conditioning coaches and teammates, the pandemic forced them to stay home.

“You don’t take away a spring and you don’t take away five and six months in the weight room with your strength and conditioning coaches … and the product isn’t going to be affected is not realistic.” Wake Forest coach Dave Clawson said. “Now, having said that, now that we’re playing football, we’re practicing again, you would expect the quality of football to get better.”

Duke coach David Cutcliffe has seen the effects of a lack of typical level of conditioning on his team, which has lost its first three games for the first time in his 13 years with the Blue Devils. It was very evident at Virginia, where Duke dominated the third quarter to take a 20-17 lead, then was outscored 21-0 over the last 15 minutes,

“I think it’s the biggest off-the-field concern,” Cutcliffe said. “… We have a limited amount of time. We’ve done some running/conditioning, but what I’ve told our coaches is that we have to condition every minute, every drill in practice.”

Virginia coach Bronco Mendenhall detected a conditioning issue for the Blue Devils before the Cavaliers opened their season against them on Saturday. For that reason, he said, and because his team spent the bulk of 12 weeks together without either a game or a positive test for the coronavirus, they played faster intentionally to wear Duke out.

“It was by design. We certainly thought in that particular game, even though it was our opener, we thought we had conditioned well," Mendenhall said. “We thought it might be to our advantage."

His suspicions were confirmed, even after Duke went ahead 20-17 in the third quarter.

“I did think as the game went on, especially our offense versus their defense, there became Duke starting to tire, and they started to become fatigued," Mendenhall said. “That didn’t appear to be the case for our offense, and I thought, therein lied some of the difference in our separation from them,"

The question, in season, then becomes how teams with conditioning deficiencies can manage to get their team up to par while also attending to a thorough game preparation.

“Well, it’s the ultimate balance, you know, and one of the hardest jobs the head coach has is how to get his team prepared to play and hopefully win a football game, but also have them fresh and feeling good,” he said. “That’s one of the things usually by this time, it’s a standard process.”