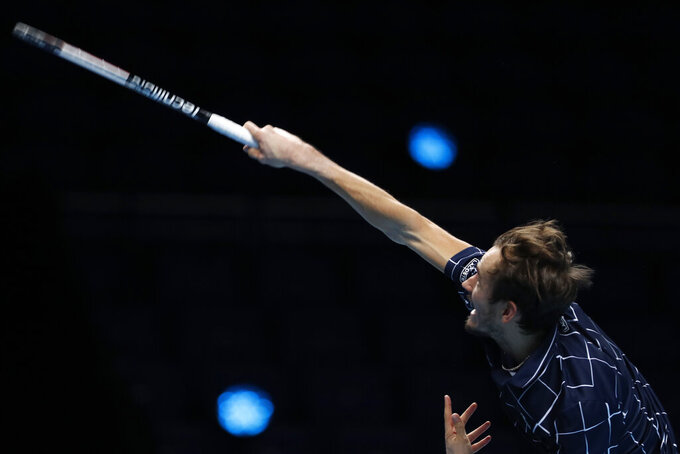 LONDON (AP) — Daniil Medvedev did not travel an easy path to the biggest title of his career at the ATP Finals: He beat No. 3 Dominic Thiem for the championship after earlier getting past No. 1 Novak Djokovic and No. 2 Rafael Nadal.

By switching tactics and coming back for a 4-6, 7-6 (2), 6-4 victory over U.S. Open champion Thiem in Sunday's final, No. 4 Medvedev became the first player to defeat each of the men ranked 1-3 in the season-ending championship — and only the fourth to do so at any tour event since 1990.

The win against Thiem on an indoor hard court in an arena without spectators, who were barred because of the coronavirus pandemic, followed those against Djokovic in the round-robin portion of the tournament and Nadal in Saturday’s semifinals

Medvedev went 5-0 in all, quite a turnaround from a year ago, when he was 0-3 at the ATP Finals. The tournament now ends its 12-edition stay in London and heads to Turin, Italy, next year.

Medvedev closed 2020 by going 10-0 in November, including seven wins against members of the Top 10. He had zero victories over Top 10 opponents over the preceding 12 months.

He called this run “a great boost of confidence for all the Slams coming up and all the tournaments. Hopefully I can continue this way.”

Thiem’s defense and power from the baseline put him on top early, and strong serving at key moments allowed him to save the first eight break points he faced.

“He was crushing the ball," Medvedev said, "like (there) was no tomorrow.”

But Medvedev, the runner-up to Nadal at the 2019 U.S. Open, finally converted on his sixth break chance of the third set by sneaking forward behind a return, making a forehand volley winner and going up 3-2.

Thiem credited Medvedev with playing an “unreal game” there.

That was enough, because Medvedev never faced a break point the rest of the way; he finished with 12 aces.

A key shift came in the second-set tiebreaker, thanks to a change in style from Medvedev.

Thiem went up 2-0 there, before Medvedev used an element of surprise by rushing to the net more often than usual — behind serves and returns — and reeling off the next seven points.

That Medvedev began moving forward behind returns “was surprising" and “very gutsy,” said Thiem, who had won three of the pair's previous four matches, including in straight sets in the semifinals in New York in September en route to his first Grand Slam trophy.

In the second set Sunday, Thiem had break opportunities to take a 4-3 edge, but he badly missed a short shot on one. He put his hands on his hips,

“Maybe," Thiem said afterward, “the match would have had a different outcome if I convert that break point.”

He stumbled and tumbled to the court in the next game, but appeared to be OK. Still, Medvedev said he sensed Thiem was fading down the stretch.

“To make Dominic tired in a three-set match,” Medvedev said, "is a great achievement.”

NOTES: Wesley Koolhof and Nikola Mektic won the ATP Finals doubles championship for their first title as a pair. They beat Jurgen Melzer and Edouard Roger-Vasselin 6-2, 3-6, 10-5 in Sunday’s final.