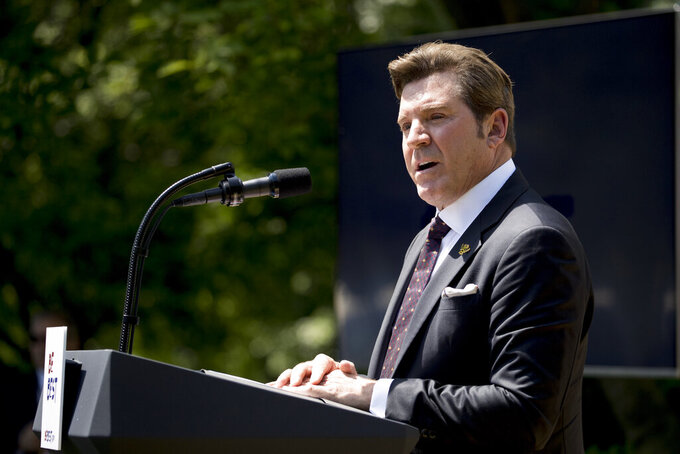 FILE - Former Fox News host Eric Bolling speaks during a one year anniversary event for the first lady's Be Best initiative in the Rose Garden of the White House on May 7, 2019, in Washington. The Sinclair Broadcast Group says it is ending its "America This Week" show with Bolling. The company said in a statement that Bolling has decided to pursue other professional opportunities. (AP Photo/Andrew Harnik, File)

NEW YORK (AP) — The Sinclair Broadcast Group says it is ending its “America This Week” show with Eric Bolling, which has been criticized for misstatements about the coronavirus pandemic.

Sinclair said the show, which has been sent to stations that the company owns in 81 markets across the country, will shut down after this week's episode “as Eric has decided to pursue other professional opportunities.”

Bolling was sympathetic to former President Donald Trump, who occasionally appeared on “America This Week” for interviews.

Bolling said he was excited about new projects, which include a podcast featuring “fun banter” between him and former NFL quarterback Brett Favre. He also said he's been discussing another TV possibilities but would give no details.

“I think it is time to get back to having fun on air again,” he said. “America needs more of that right now.”

One episode of “America This Week” was pulled from the air last July after Bolling featured an interview with a conspiracy theorist who suggested Dr. Anthony Fauci manufactured the virus that causes COVID-19 and shipped it to China. There is no evidence to back up that theory.

In October, Bolling was reportedly edited by his bosses again after saying “it's damn near certain this virus has to have been altered in a Chinese lab.”

He also said “closing down cities and economies and wearing your tube socks around your face hasn't slowed the virus down,” despite evidence that wearing masks reduces the risks of transmission.

In December, Bolling was contradicted by a guest when he suggested that vaccines are not effective in preventing COVID-19, according to the liberal watchdog Media Matters for America. Bolling also discussed whether or not it was better for young people to be infected with the coronavirus and recover than to get the vaccine.

A Sinclair spokesman had no immediate comment on whether the coronavirus episodes had anything to do with the show's end. “We wish Eric the best in his future endeavors,” the company said.

Bolling tweeted on Tuesday that he had applied to the White House Correspondents Association for a pass to attend White House briefings by the Biden administration.