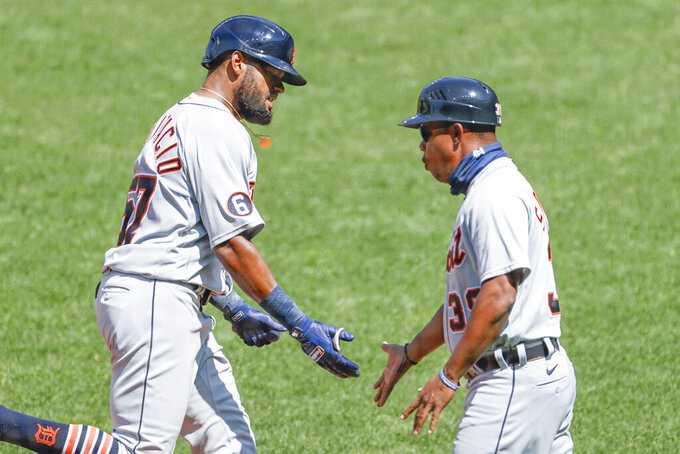 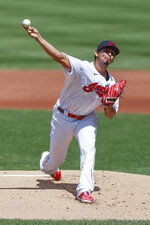 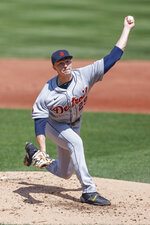 Jorge Bonifacio hit a two-run homer and Niko Goodrum and Grayson Greiner had solo shots for the Tigers, who won for the second time in the three-game series after losing their previous 20 games to Cleveland.

César Hernández belted his 12th career leadoff home run for the Indians. Greg Allen hit a three-run homer in the ninth off closer Joe Jiménez before José Cisnero recorded the final two outs for his first save.

Skubal made his second big league start and allowed a leadoff homer for the second time, but settled in to strike out five over 2 1/3 innings. The Tigers' prized left-handed pitching prospect was pulled after 69 pitches.

Norris (2-1) followed with 3 2/3 scoreless innings, striking out four and allowing two hits. The 27-year-old left-hander has a 2.77 ERA in five games this season.

Cabrera had a sacrifice fly in the first inning and a run-scoring single in the sixth, giving him 1,707 RBIs to Adrián Beltré at 21st on the career list. David Ortiz is 20th at 1,768.

First base coach Sandy Alomar Jr. managed the Indians for the 17th time this season with Terry Francona recovering from a medical procedure for a gastrointestinal ailment. The 61-year-old underwent the procedure Friday at Cleveland Clinic.

“I texted Tito and he said it’s been a tough road for him,” Tigers manager Ron Gardenhire said. “This has been a hard year. It’s not easy. That’s about the whole way I can put it.”

Isaac Paredes went 3 for 4 and Willi Castro and Goodrum each had two hits for Detroit. Cleveland’s José Ramĺrez and Jordan Luplow had two hits apiece.

Indians RHP Triston McKenzie, who struck out 10 and won his major league debut Saturday, is staying with the team for at least one more start.

The 23-year-old allowed two hits and one run over six innings, becoming the eighth MLB player with double-digit strikeouts and two-or-fewer hits in his initial start.

“I’m not sure you can script a better debut than Triston had,” president of baseball operations Chris Antonetti said.

Antonetti added that RHP Mike Clevinger and RHP Zach Plesac will not start in Cleveland's next series against the Twins. Both were demoted to the alternate training site on Aug. 14 after breaking curfew in Chicago, risking exposure to COVID-19.

The Indians and Angels will play in the fourth MLB Little League Classic in Williamsport, Pennsylvania, on Aug. 22, 2021.

Cleveland agreed to move a home game to Bowman Field for the event, which was canceled this season because of the pandemic.

Tigers: 2B Jonathan Schoop (hamstring soreness) asked for the day off to recuperate. Schoop batted .342 with three homers and four RBIs over the previous 10 games.

Indians: OF Delino DeShields (left hip tightness), who exited in the sixth inning Saturday, was unavailable and will be re-evaluated Monday. Greg Allen again filled in for DeShields in center.

Tigers: RHP Casey Mize (0-0, 6.23 ERA) makes his second big league start as Detroit returns to Comerica Park for a three-game set against the Cubs. The touted prospect struck out seven over 4 1/3 innings, allowing three runs, at the White Sox on Aug. 19.

Indians: RHP Aaron Civale (3-2, 2.91 ERA) takes the hill as Cleveland wraps its homestand with three games against Minnesota. Civale tossed his first career complete game at Pittsburgh on Aug. 19, a five-hitter with six strikeouts in a 6-1 win.