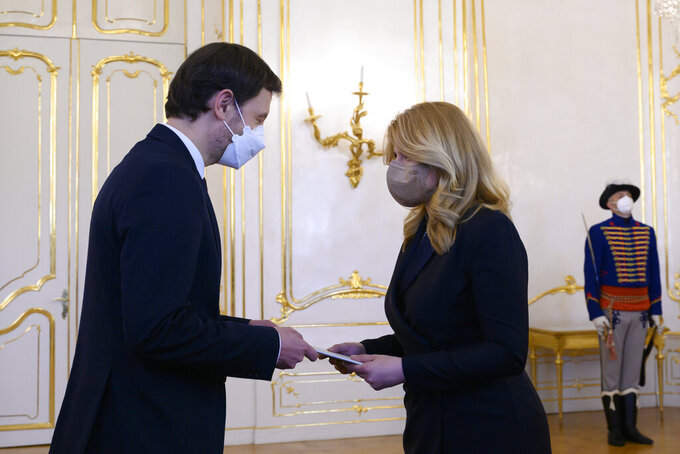 It is the first European government to collapse due to its handling of the pandemic but the move will keep the current four-party coalition in power and avoid the possibility of an early election. The coalition holds a comfortably parliamentary majority.

Heger thanked Matovic for what he has done and called the resignation “a big gesture unprecedented in the Slovak politics. I hope that we will continue to work together for Slovakia.”

The crisis erupted when a secret deal came to light at the beginning of March involving Slovakia’s agreement to acquire 2 million doses of Russia’s Sputnik V COVID-19 vaccine. The populist prime minister orchestrated the deal despite disagreement among his coalition partners.

With few changes, Heger’s Cabinet is expected to be the same as Matovic’s. The president might swear it in as soon as this week.

Matovic called on Slovaks “to forgive all the faults I committed during the year (in power).”

“Don't worry, everything will be fine,” he said. “You can absolutely trust (Heger).”

Matovic earlier defended the Sputnik V purchase, saying it would speed up the vaccination program in one of the hardest-hit European Union countries.

But for two parties in his coalition, the Freedom and Solidarity and For People, which had clashed repeatedly with Matovic’ Ordinary People party over how to tackle the pandemic, it was the last straw. They said Matovic had to step down, otherwise they would leave the government, leaving it without a parliamentary majority.

Foreign Minister Ivan Korcok, who was nominated to the post by the Freedom and Solidarity party said the vaccine was a tool in Russia’s hybrid war against the West and its purchase cast doubts on his country’s clear pro-Western orientation.

Korcok questioned the prime minister’s move to welcome the arrival of the first 200,000 Sputnik V vaccines at the airport — while he didn’t do the same in the case of the Western vaccines the country has been using.

The For People party said any vaccine needs approval from the EU’s drug regulator, which has not happened yet for Sputnik V.

Amid the crisis, six ministers from all four parties in the coalition have resigned.

After winning the parliamentary election on an anti-corruption ticket, pro-Western Matovic struck a deal last year to govern with the pro-business Freedom and Solidarity party; the conservative For People, a party established by former President Andrej Kiska; and We Are Family, a populist right-wing group that is allied with France’s far-right National Rally party.