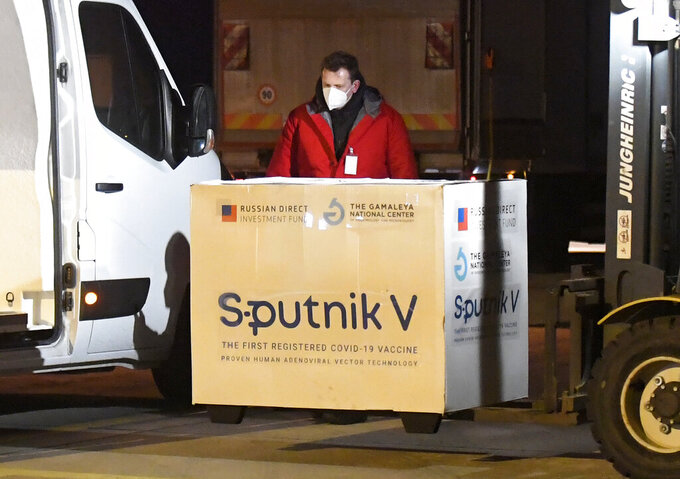 Matovic said his country will get 1 million shots in the next two months while another million will arrive in May and June.

Slovakia is the second European Union country to use the vaccine, which hasn't been approved by the European Medicines Agency, after Hungary. It hasn't been registered by Slovakia’s drug authority, but the deal was made possible by Health Minister Marek Krajci’s approval.

Matovic said the nation of 5.4 million will be able to speed up the vaccination program by 40%.

Slovakia has so far administered 305,832 shots of Western vaccines that it has received through an EU deal. To speed up what is considered a slow EU delivery, the country started to look for other options.

“Nobody has a recipe other than the necessity to inoculate,” Krajci said.

Slovakia became the country with the most COVID-19 deaths by size of population in the world amid a surge of a fast-spreading British coronavirus variant.

The number of COVID-19 patients in Slovakia’s hospitals reached a new record high of 4,008 on Sunday — a situation that has recently prompted leaders to appeal for outside help.

The seven-day rolling average of daily deaths didn't rise or increase over the past two weeks, remaining at 1.79 deaths per 100,000 people since Feb. 14 till Sunday, according to Johns Hopkins University.

The country is planning to tighten its already strict lockdown on Wednesday.

Matovic’s coalition government originally rejected a plan to acquire Sputnik V on Feb 18 after one of his four coalition partners vetoed the move.

Matovic kept the deal secret, announcing it on Monday only after a military cargo plane with the 200,000 doses of the vaccine landed in the eastern Slovak city of Kosice.

The move will likely cause further tensions in his center-right coalition.

Deputy Prime Minister Veronika Remisova, who heads the For People party that didn’t agree with the plan previously, said any vaccine to be used in her country needs to be registered by the EMA, the EU’s drug regulator.

One member of parliament for her party, Tomas Valasek, immediately announced he was leaving the coalition over the deal.

“Not in my name,” Valasek said about it.

Krajci said the authorities might start to administer the vaccine — possibly in about two weeks.

“I’m glad that the citizens of Slovakia will have this vaccine at their disposal,” he said, adding it will be administered on a voluntary basis.

With Western vaccines rolling out slowly to the EU’s 27 member states, Polish President Andrzej Duda spoke Monday with Chinese President Xi Jinping and asked him about the possibility of Poland buying Chinese-made vaccines.

Duda aide Krzysztof Szczerski said whether or not Poland ends up buying the Chinese vaccines will be a decision of the Polish government, but that Duda welcomed the Chinese leader’s willingness to make his country’s vaccines “a global public good.”

So far, Poland, like Slovakia, is only using the Western-made vaccines of Pfizer, Moderna and AstraZeneca.

Vanessa Gera in Warsaw, Poland, contributed to this report.