Slovenia on edge as 2 homegrown riders fight for Tour win 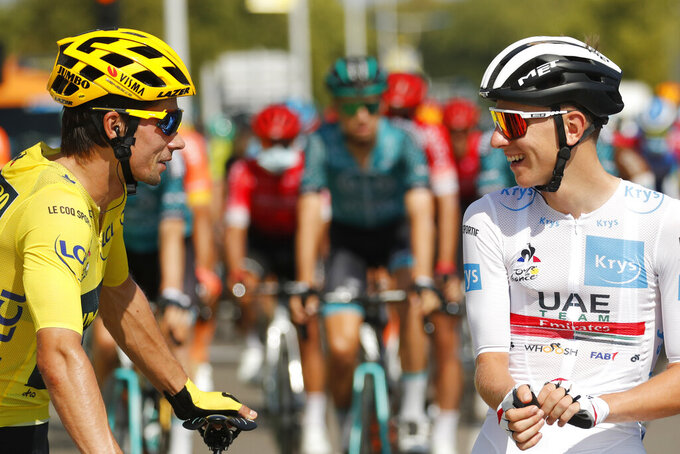 Slovenia's Primoz Roglic, wearing the yellow jersey of the overall leader, and Slovenia's Tadej Pogacar, wearing the best young rider's white jersey, talk at the start of the stage 19 of the Tour de France cycling race over 166 kilometers (103 miles), with start in Bourg-en-Bresse and finish in Champagnole, Friday, Sept. 18, 2020. (AP Photo/Christophe Ena)

Two of its own, Primoz Roglic and Tadej Pogacar, go into the last two stages of the Tour de France 1-2 in the general classification.

Neither has won the Tour before. If one of them does this weekend, they will also be the first champion from Slovenia.

The nation of just two million people, known more for its alpine skiers, ski jumpers and basketball players than cyclists, is expected to come to a standstill on Saturday as it watches the 20th and penultimate stage that will likely decide the Tour winner.

After Stage 19 on Friday, Roglic was still in the yellow jersey and leading Pogacar by 57 seconds.

The Tour has gripped Slovenes since Roglic won Stage 4, then became the first Slovene to wear the yellow jersey after Stage 9. He hasn't take it off since then, and is poised to win a second straight Grand Tour after taking the Spanish Vuelta last year. But Pogacar has been on his countryman's rear wheel for a week, and is a serious threat.

Their race within the race has thousands of Slovenes wearing yellow jerseys, and wishing coronavirus-enforced travel restrictions weren't preventing them from being in Paris for the finish on Sunday.

Roglic's hometown of Zagorje ob Savi has prepared billboards reading “Primoz Roglic our pride” to go up when he wins.

“It’s tense. When I’m asked if Primoz will win, I tell them he’s already our winner,” Svagan said.

The mayor said yellow flags can be seen all over the region, and face masks with Roglic’s image are also popular.

But Roglic's partner, Lora Klinc, is feeling the stress of being so close to a dream finish.

“I could hardly wait for this last week of the Tour. And now we are here. We are close to the end, but it’s not finished yet," Klinc said. "It’s stressful. Someone must remind me to be happy. It’s hard to believe what’s going on.

“If I knew who will win, I would be the calmest person in the world. One million factors can influence the race. But it’s natural, I expect Primoz to win."

If it was not for a horrible ski jumping accident during the junior world championship in 2007, Roglic would probably not have risen to be the world's No. 1-ranked road cyclist. The head-first training crash caused Roglic to slide unconscious down the steep hill at Planica. He was concussed and broke his nose.

He switched to cycling, but Roglic -- known in Slovenia by the nickname Rogla — didn't forget his turning point. His signature pose on podiums is dipping into a ski jump telemark landing.