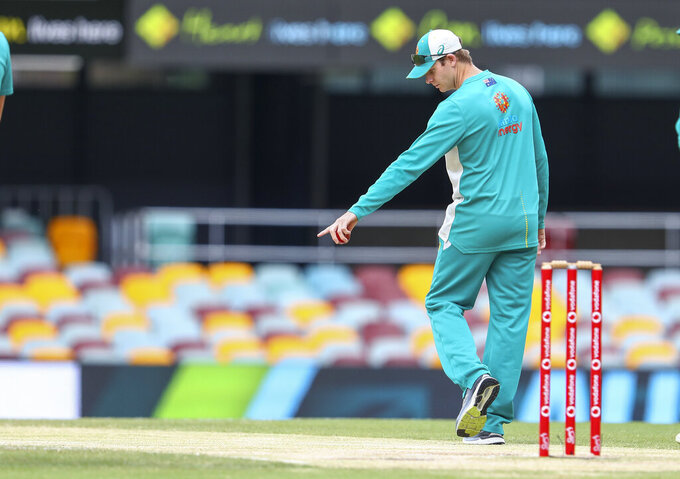 FILE - In this Jan. 19, 2021, fie photo, Australia's Steve Smith inspects the pitch ahead of play on the final day of the fourth cricket test between India and Australia at the Gabba, Brisbane, Australia. Steve Smith will miss Australia's limited-overs cricket tours to the West Indies and Bangladesh because of an elbow injury while David Warner and Pat Cummins are among the six players who've declared themselves unavailable. (AP Photo/Tertius Pickard, File)

MELBOURNE, Australia (AP) — Steve Smith will miss Australia's limited-overs cricket tours to the West Indies and Bangladesh because of an elbow injury, while David Warner and Pat Cummins are among at least six players who've declared themselves unavailable.

Cricket Australia on Wednesday announced an 18-man squad for the two tours. The squad is due to depart on June 28 for five Twenty20s and three one-day internationals in the West Indies, with five T20s to follow in Bangladesh depending on COVID-19 conditions.

Aaron Finch will captain the squad just months out from Twenty20 World Cup which is India is scheduled to host from late October. Pace bowlers Mitchell Starc, Josh Hazlewood and veteran wicketkeeper-batsman Matt Wade are also in the squad.

Glenn Maxwell, Daniel Sams, Jhye Richardson and Kane Richardson — the pair are not related — joined Warner and Cummins in opting to stay at home rather than endure another stint in biosecurity bubbles.

“We are naturally disappointed not to have all players available for the Australian team at this time however the (selectors) respect the decisions of those who have opted out of this tour,” chief selector Trevor Hohns said.

Most of the players skipping the tour had to return early from the Indian Premier League when it was suspended in May because of surging COVID-19 cases in India and then go into a strict, 14-day hotel quarantine in Sydney. The IPL restrictions were not part of national team duties, but for many players came on top of living in the bio-secure environments for previous tours with Australia.

Hohns said Smith would use the time to recover ahead of the T20 World Cup and the Ashes series at home against England starting in December.

“Steve was disappointed to miss the tour, with the decision made on medical grounds," he said.

The absences of so many players might open the door for other candidates in the limited-overs formats.

“International tours in the time of COVID-19 undoubtedly present many additional challenges for athletes," Hohns said. “They also present opportunities for others and, in this case, the chance to push for selection in the Australian men’s T20 World Cup squad later this year and beyond.”

Included in the touring group is veteran Dan Christian, who could play his first match for Australia since October 2017. Alex Carey also returns to the white-ball squad, while Josh Phillippe keeps his spot after debuting in New Zealand at the end of last summer.

Cricket Australia “has maintained from the start of the pandemic that we would support players or staff members through the additional demands placed upon them by hubs and quarantine,” team medical official Alex Kountouris said. “We look forward to a time when hubs and quarantines are things of the past, but for now we will continue to manage the situation as best we can with the well-being of our people at the forefront of our decision-making.”