Soderbergh, Cheadle return to Detroit in 'No Sudden Move' 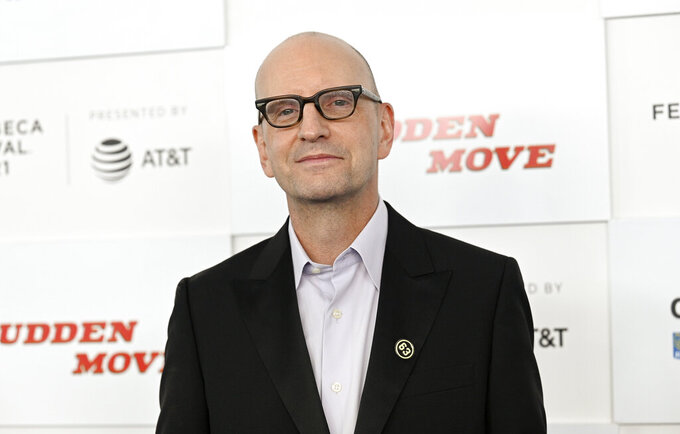 Director Steven Soderbergh attends the "No Sudden Move" premiere during the 20th Tribeca Festival at The Battery on Friday, June 18, 2021, in New York. (Photo by Evan Agostini/Invision/AP) 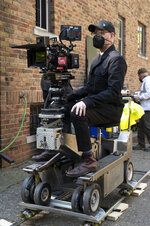 NEW YORK (AP) — During the pandemic, Steven Soderbergh has shot two feature films, released a pair of movies, written a sequel to his first film (1989's “Sex, Lies and Videotape”), re-edited some of his older movies (mostly for fun) and co-produced the Academy Awards.

It's an amount of accomplishment that really puts to shame the 1,000-piece puzzle some of us are still proud of assembling last May.

Yet at a time when much of Hollywood is going through profound change, Soderbergh has, like few others, seized an uncertain moment.

“I think it’s fair to say that I’m the cockroach of this industry,” he said smiling on a recent interview by Zoom. "I can find a way to survive in any version that I’m confronted with."

Soderbergh has averaged a film every one of his 35 years in movies, amassing a nimble, frenetic body of work spanning experimental iPhone indies ("High Flying Bird," “Unsane”) to commercial crowd-pleasers ("Ocean's Eleven," “Erin Brockovich," “Magic Mike”). His latest, "No Sudden Move," nearly didn't happen. It was initially scheduled to begin shooting in April 2020. The pandemic scuttled those plans but by early fall, after he helped create return-to-set safety protocols, Soderbergh remounted it — albeit without one star, George Clooney, who withdrew out of health concerns for his asthmatic son.

Still, “No Sudden Move,” which debuts July 1 on HBO Max, doesn't lack for stars. And while Clooney's presence would have reinforced a spirit of get-the-band-back-together, “No Sudden Move” remains a cousin to one of Soderbergh's most celebrated movies: 1998's “Out of Sight,” the slinky, sublime caper adapted from Elmore Leonard.

That film opened in Miami sunshine but descended into wintery Detroit. Twenty-three years later, “No Sudden Move” returns Soderbergh to the Motor City with Don Cheadle, who memorably played Maurice “Snoop” Miller in “Out of Sight." Since then, Cheadle has co-starred in four more films with Soderbergh ("Traffic," the “Ocean's” movies). But he's front-and-center this time.

“This was designed as vehicle for Don, whether he wanted it or not,” Soderbergh says. “Literally: I wanted to see this guy walking, walking, walking — and we parachute into this story.”

“No Sudden Move” opens with Cheadle, as Curt Goynes, strolling through 1950s Detroit. Soderbergh and screenwriter Ed Solomon conceived of the film from the start as a heist movie with a trio of thieves brought together not unlike those in Robert Wise's electric 1959 noir “Odds Against Tomorrow.” (That was one inspiration. The classic ‘70s crime film “The Friends of Eddie Coyle” was another.)

But while working on the script, Solomon came upon the history of the automotive industry’s efforts to avoid emissions controls. “No Sudden Move" begins with three hired guns (Cheadle, Benicio del Toro, Kieran Culkin), but in a multiplying series of double-crosses, expands in scope to encapsulate some of Detroit's original sins, a little like how “Chinatown” does for Los Angeles. The rest of the cast includes Bill Duke, Jon Hamm, David Harbour, Julia Fox, Brendan Fraser, Matt Damon and Ray Liotta.

“We were able to talk about redlining and community and the devastation of Detroit and the greed of the car manufacturers without proselytizing or hitting it on the head,” says Cheadle. “It was all part of the narrative intrigue. It felt in a lot of ways like ‘Out of Sight 2.0’ or 1.0, 30 years beforehand — revisiting that kind of energy.”

Cheadle wasn't necessarily eager to return to a film set at the time. But he also realized that if he didn't, a-stuck-at-home Soderbergh would probably keep writing and sending him scripts. The director managed the shoot without incident by frequent testing in two mobile COVID-19 testing units that were personally paid for. The central cast and crew members were kept in a quarantine bubble.

“I know that I put Steven through some version of hell in my uncertainty about coming back,” Cheadle says. “I lost family members to COVID. I was really gun shy about even leaving my house."

Cheadle smiles. “I also blame him for ‘Contagion,'" referring to Soderbergh's prophetic pandemic drama from 2011. “I think he’s Patient Zero.”

In April, Soderbergh led an effort to mount an in-person Oscars despite COVID-19 protocols. The telecast was handsomely shot, opening with a fluid tracking shot of Regina King, and it made an often impersonal ceremony warmly intimate. But it was also talky, with lengthy introductions and speeches, and one gambit to rearrange the final awards ended awkwardly.

Overall, Soderbergh is pleased with the show. The broadcast did what it set out to do: pull off an in-person Oscars safely while experimenting with an often inflexible format.

“As far as I know, we’re the first show in a long time where nobody ever got played off, and I’m proud of that. This is what happens when you hire the director of a movie called ‘Let Them All Talk,’" he jokes, referring to his 2020 film for HBO Max, with Meryl Streep, shot largely on an ocean liner crossing.

But Soderbergh did walk away from the experience — a satisfying and unique one, he says — with a gnawing sense of a larger existential crisis for movies. Ratings, like they have for most pandemic award shows, plummeted.

“I just look at it as a larger issue than the specifics of what our show looked like, and that is: How do we make people care about the movies the way they used to?" Soderbergh says. “To me, this is the real question that needs to be confronted.”

But the conditions, and the opportunities of streaming, are also ripe for a protean, fast-working filmmaker like Soderbergh. He recently shot his third film for HBO Max, “KIMI," a pandemic-set thriller with Zoë Kravitz. “No Sudden Move,” a period crime film for adults, is very much the kind of movie that before the streaming flood gates opened would have been unlikely to get made.

“It’s a really good time for somebody who makes things. I honestly would not like to be running these companies. Nobody knows what’s coming. Nobody knows what’s a cyclical thing as opposed to a real secular change,” says Soderbergh. “I have a long history with Warner. We both seem to be in sync with the purpose of my deal which is for me to be really busy."

Other things never change. “No Sudden Move” is Soderbergh's sixth heist film, a cycle begun with “Out of Sight" that includes the three “Ocean's” films and “Logan Lucky,” a self-financed meta-heist movie in that it sought to pull one over on Hollywood, too. The genre, the director says, encourages a filmmaker to bring something to the table — to “style it up.” “It's just made for the movies,” he says.

As time wound down before Soderbergh and Cheadle had to leave for the Tribeca Festival premiere of “No Sudden Move," he wondered if returning to the scene of his first crime movie was pushing his luck.

“I’ve had two really good experiences in Detroit and gotten out of there with two movies I’m really happy with,” said Soderbergh. “The question is: Should I just let that go?”

Cheadle didn't hesitate. “Tee it up! Go to the well!” he encouraged. “Spin the wheel!”

This story has been updated to correct spelling of Brendan Fraser’s last name.