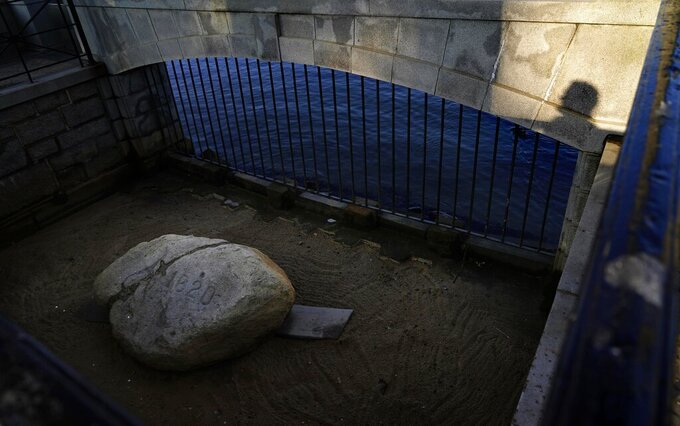 A visitor casts a shadow while looking at Plymouth Rock, the traditional point of arrival of the Pilgrims on the Mayflower in 1620, in Plymouth, Mass., Wednesday, Aug. 12, 2020. Disease introduced by traders and settlers, either by happenstance or intention, played an important role in the conquest of Native peoples. And that inconvenient fact, well known to the Natives' descendants, is contrary to the traditional narrative of the "New World." (AP Photo/David Goldman)

Dozens of events were planned to mark the 400th anniversary of the religious separatists’ arrival at what we now know as Plymouth, Massachusetts. But many of those activities have been postponed or canceled due to the coronavirus pandemic.

"Novel infections did MOST of the dirty work of colonization,” says Fenn, a history professor at the University of Colorado Boulder who has studied disease in Colonial America.

Plymouth has taken an outsized place in the American story.

But the 102 passengers aboard the Mayflower did not cross the Atlantic to establish a democratic society. When they set sail from Plymouth, England, on Sept. 16, 1620, they were escaping religious persecution — and looking for a place where they could prosper.

When they disembarked from the leaky, fetid carrack, they stepped foot on a land already cleared by death’s scythe.

“Let’s not give disease exclusive agency in allowing Europeans to take over,” Kelton said in a recent interview.

In August, Native descendants from all over New England and beyond were set to converge on Plymouth — to dance and drum around a ceremonial fire, march through the town, and make offerings of tobacco and sage in homage to their forebears. The Ancestors March was listed as a “signature event” on the Plymouth 400 calendar.

“We were looking forward to it so we could actually speak our truth,” says Troy Currence, a powwow or medicine man from the Herring Pond Wampanoag Tribe of Cape Cod.