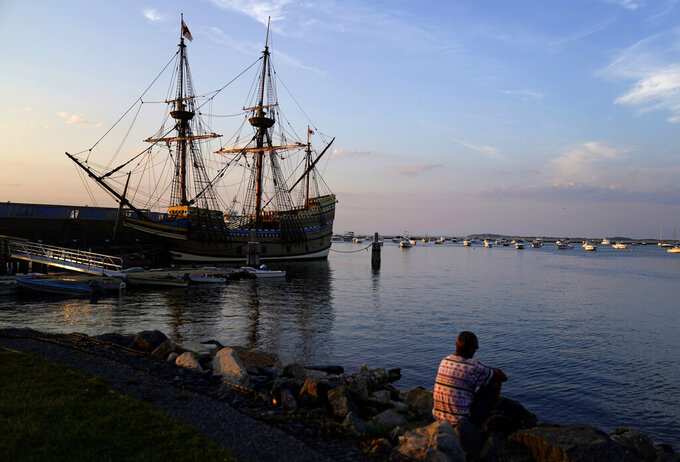 The Mayflower II, a replica of the original Mayflower ship that brought the Pilgrims to America 400 year ago, is docked in Plymouth, Mass., days after returning home following extensive renovations, Wednesday, Aug. 12, 2020. A disease outbreak that wiped out large numbers of the Native inhabitants of what is now New England gave the Pilgrims a beachhead in the "New World." So, some historians find it ironic that a pandemic has put many of the 400th anniversary commemorations of the Mayflower's landing on hold. (AP Photo/David Goldman)

Dozens of events — from art exhibits and festivals to lectures and a maritime regatta featuring the Mayflower II, a full-scale replica refitted over the past three years at a cost of more than $11 million — were planned to mark the 400th anniversary of the religious separatists’ arrival at what we now know as Plymouth, Massachusetts.

But many of those activities have been postponed or canceled due to the coronavirus pandemic. And historian Elizabeth Fenn finds a certain perverse poetry in that.

“The irony obviously runs quite deep,” says Fenn, a history professor at the University of Colorado Boulder who has studied disease in Colonial America. “Novel infections did MOST of the dirty work of colonization.”

Plymouth wasn’t the first or the largest or most successful of the English settlements. But it has taken an outsized place in the American story.

But the 102 passengers aboard the Mayflower — equal numbers “saints” and “strangers” — did not cross the Atlantic to establish a democratic society. When they set sail from Plymouth, England, on Sept. 16, 1620, they were escaping religious persecution — and looking for a place where they could prosper.

After more than two months at sea, the Pilgrims landed at the place the Wampanoags called Patuxet, meaning “at the little falls.” When they disembarked from the leaky, fetid carrack, they stepped foot on a land already cleared by death’s scythe.

“Portions of coastal New England that had once been as densely populated as western Europe were suddenly empty of people, with only the whitened bones of the dead to indicate that a thriving community had once existed along these shores,” Nathaniel Philbrick wrote in his 2006 bestseller, “Mayflower."

According to Winslow, the interpreter used the threat of plague to strengthen his own position among his people. If true, the Pilgrims were all too willing to play along.

The recent epidemic had decimated the Pokanoket, but had largely spared their chief rivals, the Narragansett. Some historians have suggested that Massasoit helped the Pilgrims, not of out kindness, but necessity.

Whether formed out of pity, fear or pragmatism, the alliance between Massasoit’s people and Plymouth did not last long.

Within 55 years of the Pilgrims’ arrival, his son Metacomet — better known as King Philip — was rallying the region’s tribes to push the English back across the sea. And Gov. Josiah Winslow, Edward’s son, dispatched soldiers into the forests and swamps to hunt them down.

“We are left with a tragic and paradoxical conclusion: Lethality in one population proved to be the means of survival for another group,” Booss wrote. “Without the intercession of a highly lethal, geographically focused and time specific epidemic among the Wampanoag, the history of the Pilgrims, New England, and the mythos of America might have been very different.”

“It was their germs, not these imperialists themselves, for all of their brutality and callousness, that were chiefly responsible for sweeping aside indigenes and opening the Neo-Europes to demographic takeover,” Crosby wrote.

“Let’s not give disease exclusive agency in allowing Europeans to take over,” Kelton said in a recent interview. “In certain circumstances, it allowed them to establish beachheads. It worked synergistically with other aspects of colonialism. But, end of the day, there are human beings that are making decisions. And why are these decisions being made? Europeans seeing something they want and using whatever means they can to get it.”

In the spring of 1763, Delaware, Shawnee and Mingo warriors laid siege to Fort Pitt, the site of present-day Pittsburgh. When Delaware emissaries tried unsuccessfully to convince the English to surrender and leave, English trader and militia captain William Trent sent them away with two blankets and a silk handkerchief from the fort’s smallpox infirmary.

“I hope it will have the desired effect,” Trent wrote in his diary.

Since smallpox was already present before the siege, Fenn and others think it is unlikely that Trent’s “gift” had the desired effect. But Fenn says it is hard to overstate the role disease played in the conquest of North America.

In August, Native descendants from all over New England and beyond were set to converge on Plymouth — to dance and drum around a ceremonial fire, march through the town, and make offerings of tobacco and sage in homage to Massasoit and King Philip. The Ancestors March was listed as a “signature event” on the Plymouth 400 calendar.

“We were looking forward to it so we could actually speak our truth,” says Troy Currence, a powwow or medicine man from the Herring Pond Wampanoag Tribe of Cape Cod. “That we’re still here. We’re not a destroyed people.”