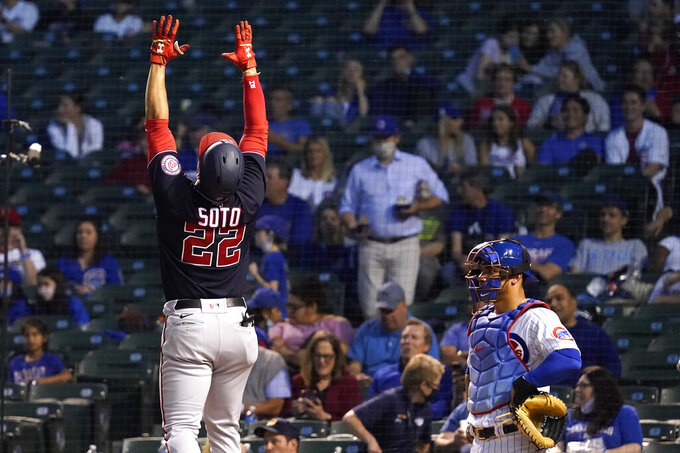 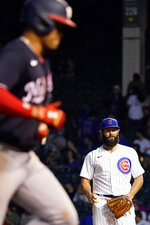 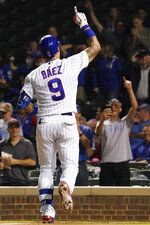 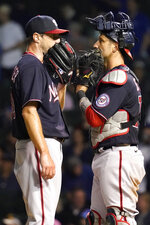 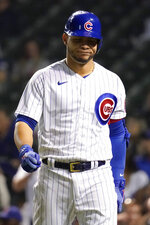 Soto became the 16th player to hit the scoreboard that was installed in 2012, hitting a 421-foot drive on a 3-2 slider in the fifth from Jake Arrieta (4-4) that gave Washington a 4-1 lead. Soto also singled twice.

Soto hit his fourth homer this season. He missed time with a strained left shoulder.

“It's just feeling better,” Soto said. “I put the ball in the air a couple of times and it feels almost normal again. We're catching the ball out there and just letting it fly."

Scherzer (4-2) allowed two runs and five hits in five innings with eight strikeouts and four walks. The three-time Cy Young Award winner labored at times against the Cubs but has given up just four runs over his last four starts.

Scherzer wasn't happy with his four walks, but credited the Cubs hitters with tough at-bats that drove his pitch count to 100.

“I did what I had to to get though,” he said. “I just didn't execute when I should have executed. I always shoulder the blame when it comes to walks and that's probably why the pitch count got out of control.”

Kyle Finnegan, Daniel Hudson and Brad Hand combined on three-hit relief. Hand struck out three in the ninth for his fifth save in seven chances despite allowing Javier Báez's solo homer.

Ian Happ's RBI single had pulled the Cubs to 4-2 in the fifth.

Arrieta allowed four runs and seven hits in five innings in his second start since coming off the injured list caused by a cut in his right thumb. Washington stopped the Cubs' three-game winning streak and dropped Chicago to 21-21.

“I came out a little flat,” Arrieta said. “I just didn't get into a rhythm. A tough night, not what I want, especially going up against Max.”

Ian Happ and Nico Hoerner had RBIs for the Cubs, who slipped to 21-21. Jake Arrieta (4-4) yielded four runs on seven hits in five innings in his second start since coming off the injured list.

Nico Hoerner’s bloop single in the second drove in the first run.

Trea Turner hit an RBI single in the third and scored on a wild pitch, and Victor Robles' run-scoring single gave Washington a 3-1 lead in the fourth. Robles would have reached second, but tripped over first base and stayed down for a few minutes while training staff checked his right ankle.

Martinez was ejected in the seventh in an argument with first-base umpire Chris Conroy.

Turner struck out on a pitch that sailed over catcher Willson Contreras. Turner sprinted to first, but was called out for running outside the baseline and creating interference as Contreras’ throw went into right field.

Martinez picked up the first base bag, slammed it to the ground and then kicked it.

Turner said he was running straight to the base. Martinez watched replays after being thrown out and said he just got even more frustrated.

“I sat there and was beside myself every time I watched it,” Martinez said. “Trea ran as straight as he possibly could have run to the base.”

The Cubs selected P.J. Higgins from Triple-A Iowa before the game and designated C Tony Wolters for assignment. Higgins, listed as a catcher, made his major league debut when he pinch hit in the fourth, then stayed in the game to play first.

Nationals: An unidentified player who is vaccinated and asymptomatic tested positive for COVID-19, Martinez said before the game. That player was deemed to have been in close contact with another Nationals player who is not vaccinated. The Nationals placed RHP Erick Fedde and RHP Tanner Rainey on the injured list before the first pitch. RHPs Kyle McGowin and Paolo Espina were activated from Washington’s taxi squad to fill the spots.

After the game, Scherzer said that Fedde was the vaccinated player and that vaccinated asymptomatic players should be allowed to play.

Robles left the game in the seventh with after his ankle soreness worsened. He'll have tests on Thursday.

Cubs: RF Jason Heyward left in the fourth inning with left hamstring tightness. ... 1B Anthony Rizzo was held out of the starting lineup with lower back tightness. ... SS Baez also didn’t start, put pinch hit in the seventh and stayed in the game.