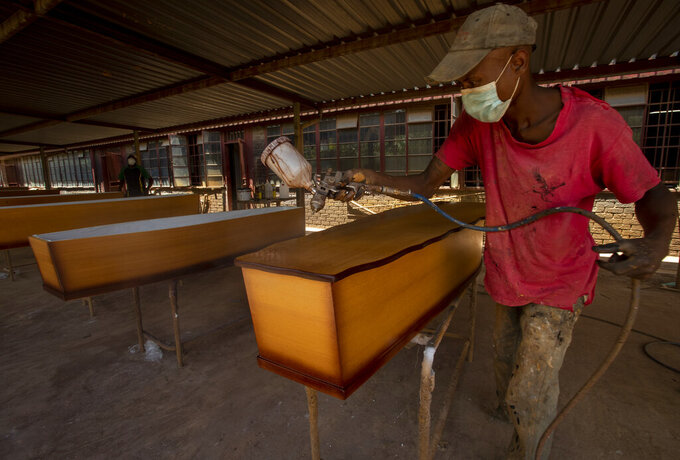 A worker finishes the details on a production line of coffins in his workshop, in Evaton, south of Johannesburg, South Africa, Monday, Feb. 15, 2021. Maseko, says the material and cost for making coffins has gone up due to less suppliers due the impact of Covid-19 on most businesses. (AP Photo/Themba Hadebe)

JOHANNESBURG (AP) — South Africa is preparing to give its first COVID-19 vaccinations — shots of the Johnson & Johnson vaccine still being tested — to health care workers this week, the health minister said Tuesday.

The first batch of 80,000 doses of the J&J vaccine, which has not been authorized for general use in South Africa or anywhere else in the world, is expected to arrive in the country imminently and will be administered to health care professionals across the country, Zweli Mkhize told parliament.

Tests so far suggest the J&J vaccine is safe and effective at preventing severe illness or death from COVID-019.

Another 500,000 J&J doses are expected to be flown to South Africa within four weeks for the vaccination campaign.

“We salute the health care workers who have chosen vaccination for their own protection and the protection of their colleagues, families and community members," Mkhize said, encouraging all front-line health workers to register on the government's internet site.

South Africa has set up 20 vaccination centers in its nine provinces to inoculate the 80,000 health workers over the next two weeks. This will be done by 164 vaccinators who will each give shots to approximately 48 people a day at the rate of six to seven clients an hour, Mkhize said.

“As more doses arrive the service will be ramped up accordingly to ensure that we maintain a good rate of daily vaccines,” said Mkhize.

South Africa intends to vaccinate 40 million people, representing about 67% of its population, by the end of the year, according to Mkhize.

The Johnson & Johnson vaccine will be the first to be used as it is shown by a large international clinical trial to be effective in offering protection from the variant that is now dominant in South Africa, he said. Early results from the trials shown the J&J vaccines has 57% efficacy against moderate to severe cases of COVID-19 caused by the variant here.

In the United States, the Food and Drug Administration is due to consider the J&J trial on Feb. 26 and the European authority is also planning to assess it in mid-March.

South Africa does not have plans to administer the AstraZeneca vaccine which a small, preliminary test shows offers minimal protection against mild to moderate disease caused by the variant here, said Mkhize. Experts think the AstraZeneca vaccine could still offer better protection against severe disease and death caused by the variant dominant in South Africa, but that has not yet been tested.

South Africa has 1 million doses of the AstraZeneca vaccine and will offer them to the African Union facility that is procuring vaccines for the continent, he said.

Mkhize denied reports that the vaccines had been returned to the Serum Institute of India where they were purchased.

“I can also say that we have actually secured enough doses to vaccinate all the people who will need to be vaccinated in South Africa,” Mkhize told lawmakers.

South Africa has recorded nearly 1.5 million cases of COVID-19, including more than 47,000 deaths, which is 41% of the confirmed cases in Africa's 54 countries, representing 1.3 billion people.

Vaccination of Zimbabwe's front-line workers such as health personnel, police officers, soldiers and border immigration officials will start Thursday after the country received a donation of 200,000 doses of China’s Sinopharm vaccine on Monday.

An additional 600,000 doses of the same vaccine purchased by the Zimbabwean government are expected in early March, according to government officials. More vaccines are expected from Russia, Britain and India. Zimbabwe plans to vaccinate 10 million people, or 60% of the population, to achieve herd immunity.