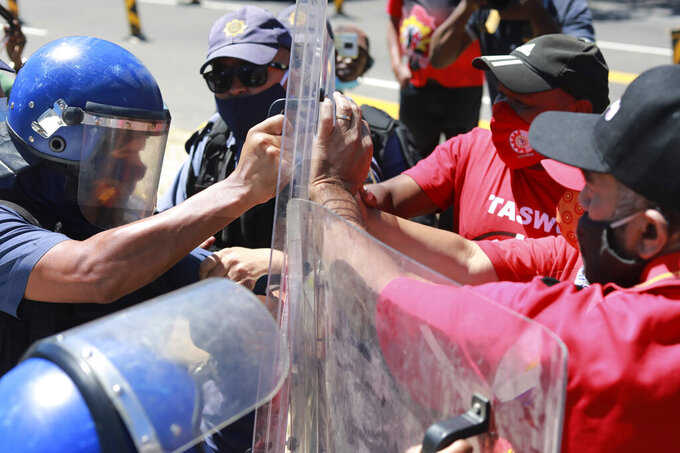 JOHANNESBURG (AP) — South Africa plans to spend $712 million to vaccinate some 67% of its 60 million people to control the country's COVID-19 battle and get the economy to rebound from its decline of 7.2% last year.

Finance Minister Tito Mboweni said the vaccination drive will help South Africa's economy, the most developed in sub-Saharan Africa, to rebound by 3.4% this year.

Mboweni announced the annual budget Wednesday, a day after the country’s unemployment rate reached 32.5%, according to the national statistics agency. The unemployment rate among the youth is more than 60%, a staggering figure in a country where more than 16 million people receive welfare grants.

South Africa’s economy was already in recession before the COVID-19 pandemic hit and the government imposed a strict two-month lockdown. The shutdown and continuing restrictions caused a serious economic contraction in 2020. An estimated 2 million jobs have been lost, according to the country’s official statistics.

“With this framework we provide the budget for South Africa’s vaccination campaign. This campaign allows us to emerge from the restrictions to economic activity. We are allocating more than Rand 10 billion ($712 million) for the purchase and delivery of vaccines over the next two years," said Mboweni, delivering his budget to parliament.

Mboweni said the vaccines would be given to all South Africans free of charge and his budget did not have any tax hikes for businesses or individuals in order to stimulate the economic recovery.

Last week South Africa launched the first phase of its vaccination campaign in which it is inoculating an estimated 500,000 front-line health care workers with the Johnson & Johnson vaccine, as a large-scale observational study. The J&J vaccine is authorized for testing purposes in South Africa but has not yet been approved for general use

South Africa is selling its AstraZeneca vaccine doses to the African Union which will distribute them to countries on the continent where the variant is not a factor, Health Minister Zweli Mkhize has announced.

South Africa is the country hardest hit by the pandemic in all of Africa, with a cumulative total of more than 1.5 million confirmed cases and nearly 50,000 deaths.

As the finance minister presented the budget, members of the South African Federation of Trade Unions staged a protest near parliament over growing inequality and looming job cuts in various sectors.

Police reportedly used stun grenades to disperse a crowd that attempted to make their way to parliament. Under the COVID-19 lockdown level 3 regulations, no political gatherings are allowed.

The headline of this story has been corrected to say the vaccine drive will cost $712 million.