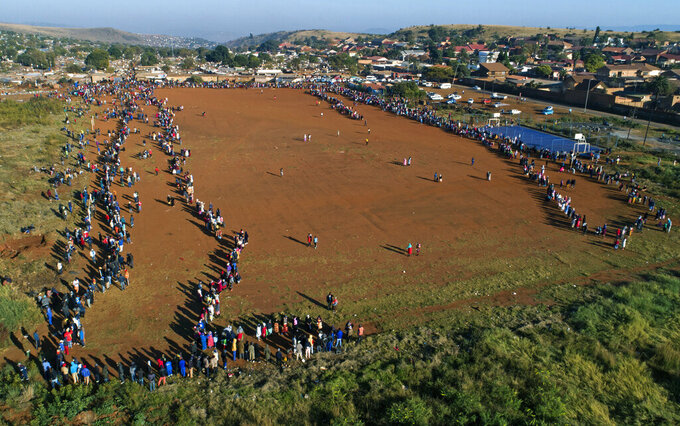 FILE — In this May 20, 2020 file photo people queue to collect food at a distribution point in Pretoria, South Africa. South Africa's COVID-19 response has been marred by corruption allegations around its historic dollars 26 billion economic relief package, as the country with the world's fifth highest number of COVID-19 cases braces for more. (AP Photo/Phil Magakoe/File}

JOHANNESBURG (AP) — South Africa’s COVID-19 response is marred by corruption allegations around its historic $26 billion economic relief package, as the country with the world’s fifth highest number of COVID-19 cases braces for more.

President Cyril Ramaphosa has announced a wide-ranging investigation into claims that unscrupulous officials and private companies are looting efforts to protect the country’s 57 million people.

“More so than at any other time, corruption puts our lives at risk,” he said in a national address Thursday night.

Food for the poor. Personal protective equipment for health workers. Grants for the newly laid off. All have been affected, he said.

South Africa is seen as the best-prepared of any country in sub-Saharan Africa for COVID-19, but years of rampant corruption have weakened institutions, including the health system. In October, the head of the government’s Special Investigating Unit said fraud, waste and abuse in health care siphoned off $2.3 billion a year.

The unit is already investigating more than 20 cases of corruption related to the COVID-19 relief money, spokesman Kaizer Kganyago said.

South Africa now has more than 434,000 confirmed virus cases — well over half of the continent’s total — and over 6,600 deaths, while a new report has suggested the real death toll could be higher. Public hospitals struggle and some health workers are openly scared. More than 5,000 of them have been infected.

While nurses and others plead for more protection, overpricing scams for badly needed supplies are on the rise. After inflating face mask prices by up to 900%, companies Sicuro Safety and Hennox Supplies admitted guilt and were fined.

In South Africa's new virus epicenter, Gauteng province, a company supplying the government with PPE, Royal Bhaca, charged more than four times the regular price — or about $3.50 — per surgical mask. Sanitizer was almost twice the price, or $5 for a 500ml bottle, according to an investigation by The Sunday Independent newspaper.

Even Dis-Chem, a popular pharmacy, was fined for inflating the price of masks.

“The health minister tells us that enough money has been distributed for PPE to provinces, but when we go to hospitals we do not see this,” Desfontaines said. “In some cases, it has been purchased but it does not reach the people it was intended for.”

Pandemic-related corruption has been reported across South Africa.

In Kwazulu-Natal province, the government suspended officials allegedly involved in making massively overpriced purchases of up to $2.4 million of personal protective equipment and blankets for the poor.

Eastern Cape province, one of the poorest regions and a growing COVID-19 hot spot, faces questions over the purchase of unsuitable “emergency scooters.” The provincial health department allegedly purchased 100 of the motorbikes at $5,993 each, though they retail for about $2,337 apiece.

Other allegations include fake charity organizations that have sprung up to tap relief funds.

Meanwhile, the pandemic and lockdown restrictions have badly hurt the economy. Unemployment is now above 30%, and more than 16 million people already were on social welfare grants. That number will climb.

Some 3 million people lost their jobs in the first month of the lockdown, according to the latest National Income Dynamics Study conducted by researchers from five South African universities.

Many families are relying on government food parcels to survive, often lining up in the Southern Hemisphere’s wintry weather for hours.

But some allege they have been turned away for the emergency COVID-19 relief grant of just over $20 for unemployed South Africans.

Meanwhile, the Unemployment Insurance Fund has reported claims of fraudulent payouts. In one case, $340,000 meant for 200 workers was paid to an individual’s bank account.

Ramaphosa has addressed the complaints, saying over 4.4 million people have received the grants. “There were delays in paying this amount but future payments will be made more quickly now that the necessary systems are in place,” he said.

The grants are planned for six months. The pandemic should last much longer.

Ramaphosa was under pressure to act against corruption even before the pandemic. He took office in 2018 after predecessor Jacob Zuma resigned amid sprawling allegations of graft, then won the 2019 election on an anti-corruption ticket, vowing to clean out the rot.

But the latest revelations have hit close to home. The husband of the president’s spokeswoman, Khusela Diko, has been accused of securing large contracts to provide COVID-19 protective equipment and supplies.

Diko has denied wrongdoing, saying her husband, King Madzikane Thandisizwe Diko II, had withdrawn from the contracts due to concerns over a possible conflict of interest.