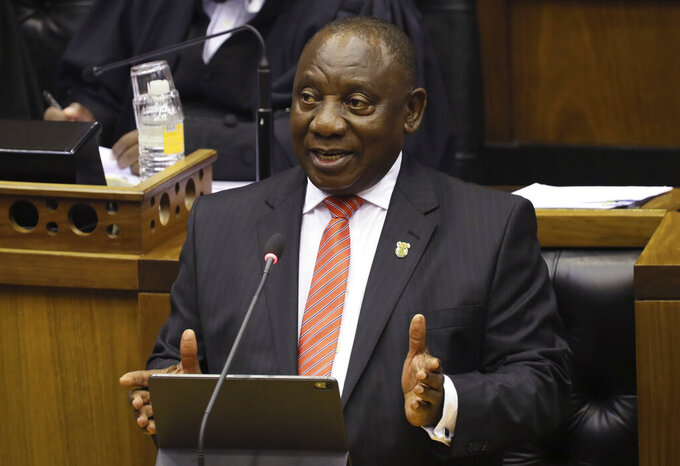 Many South Africans have been dismayed to see the country's widespread graft problem infiltrate efforts to stop the spread of the coronavirus. South Africa has the world's fifth largest virus caseload with more than 600,000 confirmed infections.

Ramaphosa promised to overhaul the government’s procurement system, which he said is vulnerable to corruption. “Clearly, this COVID moment has given us the opportunity" for change, he said, promising “a much more effective" system.

It was his first question-and-answer session with lawmakers since corruption allegations were leveled against high-ranking officials in the government and the ruling African National Congress party.

“It is disgraceful that at this time of national crisis, there are companies and individuals who seek to criminally benefit from our efforts to protect people’s health and save lives,” Ramaphosa said.

Graft claims related to the country’s $26 billion social relief package for the pandemic, which included the purchase of large amounts of personal protective equipment, have rocked the country. Ramaphosa’s own spokeswoman, Khusela Diko, was placed on leave due to the allegations.

The provincial health minister of the country’s economic hub, Gauteng province, Bandile Masuku, also has been placed on leave after being linked to corruption claims.

The leader of the official opposition, the liberal Democratic Alliance party, criticised Ramaphosa for allowing the former mayor of eThekwini municipality, Zandile Gumede, to be appointed as a provincial lawmaker despite facing corruption charges.

Ramaphosa has been accused of being soft on corruption amid concerns that implicating too many senior leaders of the ANC could split the ruling party.

The president said the matters of the former mayor and his spokeswoman are being investigated by the relevant entities, which will advise him on the appropriate action to take.

This week South Africa's government began publishing contracts and procurement offers related to the pandemic, which Ramaphosa called “unprecedented in our country’s history, enabling members of the public to find detailed information about how public funds are being spent.”

Having secured the presidency on an anti-corruption ticket after predecessor Jacob Zuma was pressured to resign amid multiple scandals in 2018, Ramaphosa has been under pressure to show that his government is taking a tough stance on the scourge.

This week his letter to ANC party members cited “clear progress” since the election, but he scolded: “Today, the ANC and its leaders stand accused of corruption. The ANC may not stand alone in the dock, but it does stand as accused No 1."

Leftist opposition party leader Julius Malema called on Ramaphosa to scrap the current procurement system and establish special courts that would deal with corruption cases, following the model that was used to prosecute crimes committed during the 2010 FIFA World Cup that was held in South Africa.

Corruption cases would be dealt with swiftly under that model, Malema said.

The COVID-19 corruption scandals dominated Thursday's session with lawmakers, but Ramaphosa also was taken to task over the scourge of gender-based violence in South Africa and the country’s dire economic situation.

South Africa slipped into recession before the pandemic lockdown that started in March, and its unemployment rate is now above 30%.