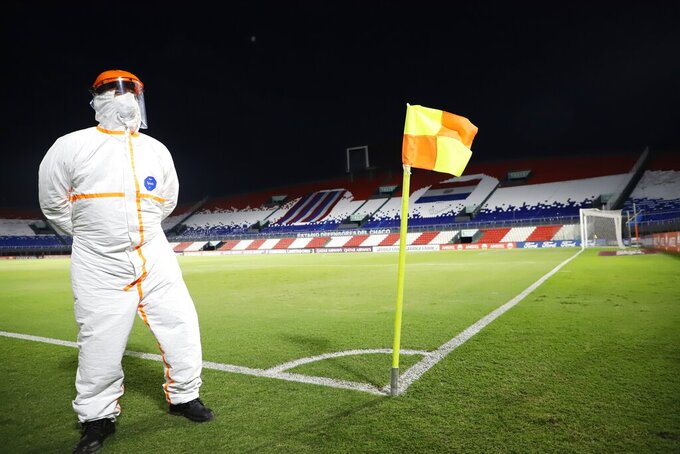 A Conmebol worker, wearing protective gear due to COVID-19, stands guard on the pitch inside "Defensores del Chaco" Stadium before the start of a Copa Libertadores soccer match between Brazil's Gremio and Ecuador's Independiente del Valle in Asuncion, Paraguay, Friday, April 9, 2021. (Natalia Aguilar/Pool via AP)

CONMEBOL announced Tuesday that the jabs will be used to inoculate players ahead of the Copa America in June and for other regional tournaments.

“This is a huge step forward to beat the COVID-19 pandemic, but it doesn’t mean that we will in any way relax,” CONMEBOL president Alejandro Domínguez said in a statement.

The soccer body said it is the first confederation to obtain a vaccine for widespread immunization, but it gave no details about who will get the vaccines and when.

Uruguay President Luis Lacalle Pou, who worked as mediator, “was crucial for the completion of a deal of great importance for South American soccer," CONMEBOL said.

Domínguez thanked Sinovac “for understanding that soccer is a fundamental activity for the economy, the culture, and the physical and mental health of South Americans.” However, Chinese officials have said they're looking for ways to boost the effectiveness of coronavirus vaccines.

South America is now the epicenter of the pandemic with cases, hospitalizations and deaths on the rise. Brazil's death toll, second only to the United States', is quickly approaching 360,000. The country's seven-day average number of deaths hit a new record on Monday at 3,124. Several state championships were suspended in Brazil because of the collapse of the health care system.

Other countries in the region are also experiencing a rise of the disease, which many health analysts have blamed on a potentially more contagious variant coming from Brazil.

“We will keep our work responsibly, which allowed us to finish our tournaments without setbacks and without changing their formats," Dominguez said, in a reference to the last season.

This year's Copa America, taking place in Argentina and Colombia, will be played between June 13 and July 10. The Copa Libertadores is already underway.