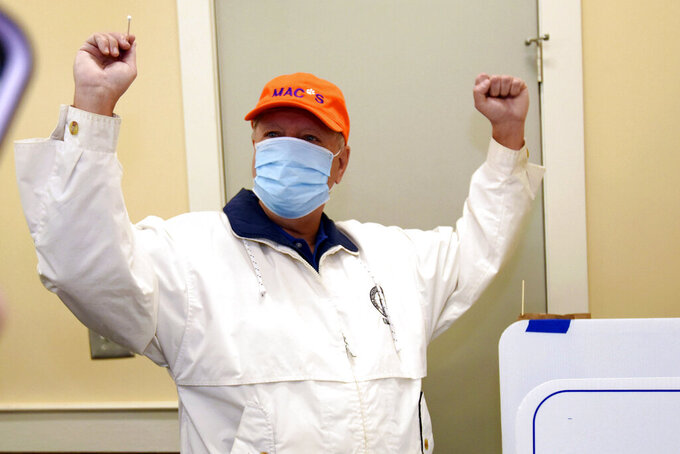 “This victory is an answer to a lot of prayers,” Graham told supporters Tuesday night in Columbia. “To those of you who have been following this race from afar, I hope you got the message. If you don't get this message, it's hopeless."

The competition between Graham, 65, and Harrison, 44, turned into South Carolina’s most expensive race ever, with both candidates posting record fundraising that has surpassed $200 million total and continued to grow in the race's closing days. Harrison raised $57 million in the third quarter alone, shattering all quarterly Senate fundraising records. He became the first U.S. Senate candidate to ever amass a war chest of more than $100 million over the course of the race.

Graham told The Associated Press late last week he had also raised at least $100 million, his third-quarter haul of $28 million being the largest ever posted by a Republican Senate candidate in a quarterly filing period.

Graham often critiqued Harrison for relying mostly on out-of-state supporters, who made up about 90% of his donor base. Early on, through relationships forged in part through his standing as associate Democratic National Committee chairman, Harrison attained a high profile that brought with it small-dollar donors from all over the country, many funneled through Democrats’ ActBlue fundraising portal.

In his pursuit of a fourth term, Graham also went outside the state for money, with about 86% of his funders living somewhere other than South Carolina. Both candidates, along with third-party groups pouring money into the race, waged nonstop ad campaigns on television and digital spaces that at times left voters fatigued by the content inundating them at every turn.

“You wasted a lot of money,” he said. “This is the worst return on investment in the history of American politics.”

Some polling in the campaign’s closing weeks showed a head-to-head race.

But Graham mustered support across South Carolina, where all statewide offices are held by Republicans and support for President Donald Trump remains strong. Graham’s newly minted close relationship with the president played a prominent role, with Harrison and other critics portraying him as too willing to acquiesce to his former foe, whom he at one time called a “race-baiting, xenophobic, bigot.” Graham maintained that he felt it in his constituents’ best interests that he align with the president, who has remained popular in South Carolina.

With 86% of the expected vote in, Graham led Harrison by nearly 15 percentage points, a margin that was close to his 2014 victory over a state senator, who had raised about $500,000 total.

Graham's win Tuesday also appeared to mirror that of Trump, who carried South Carolina by more than 16 percentage points over Democrat Joe Biden.

In the race’s closing weeks, Trump’s nomination of Amy Coney Barrett to the U.S. Supreme Court created a dual challenge for Graham. As chairman of the Senate Judiciary Committee, Graham was tasked with shepherding the confirmation hearings, which began just three weeks before Election Day, as well as fending for his own seat.

Graham seemed to take the assignment in stride, using some moments to advocate for his ability to represent the needs of his constituents, such as calling the Affordable Care Act “a disaster for the state of South Carolina,” blaming the program for rural hospital closures advocating instead for a bloc grant program. Harrison, meanwhile, called out what he saw as Graham’s hypocrisy on previous opposition to election-year high court appointments and relished having the state much to himself, switching from a largely virtual campaign pushed online due to the pandemic and spending more time holding socially distanced, in-person events.

In his concession speech, Harrison said late Tuesday that he wished Graham well and had hopes the Republican would strive toward bipartisan work in his fourth term.

“I hope he will maintain the spirit of cooperation that he’s known for, while we take a step forward in creating a new South,” Harrison said, using a turn of phrase he’s often repeated on the campaign trail.

Helen Sims, 49, who works at a Wal-Mart, cast her ballot for Harrison on Tuesday, saying Graham should have helped Americans struggling through the pandemic before prioritizing the Supreme Court hearings. She said Harrison’s upbringing and his youthful energy will lead to better outcomes for working people.

“We have walked in Jaime’s shoes,” said Sims, who is Black. “Jaime’s compassionate.”

Tim Orr, an asphalt contractor from Lexington, said he was voting to reelect Trump after a small business loan and his $1,200 stimulus check helped keep him afloat following the pandemic. But Orr, 63, was less enthusiastic about Graham, citing his uneven support of Trump, but didn't want to throw the race to Harrison.

On Tuesday night, Graham said he heard the voters loud and clear, and that he would carry their message with him to Washington.

"I'm going back to the Senate with a purpose," Graham said Tuesday night. “I've never wanted my job more than I do now.”

Michelle Liu, a corps member for the Associated Press/Report for America Statehouse News Initiative, contributed to this report from Lexington, S.C. Report for America is a nonprofit national service program that places journalists in local newsrooms to report on undercovered issues.