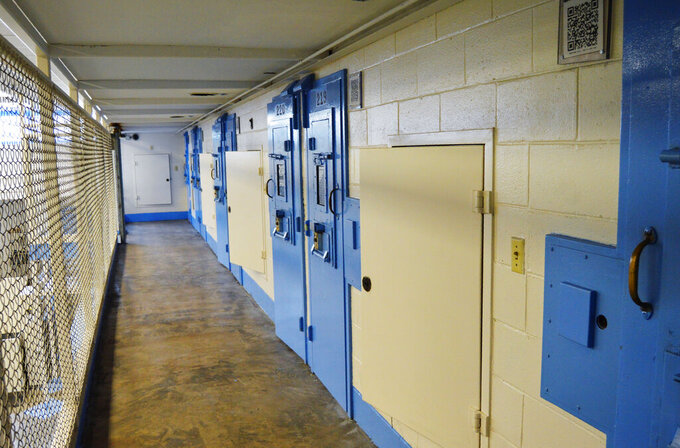 FILE - This undated file photo provided on July 11, 2019, by the South Carolina Department of Corrections shows the new death row at Broad River Correctional Institution in Columbia, S.C. The state Supreme Court has scheduled an execution date of Dec. 4, 2020 for Richard Bernard Moore, who was convicted of killing a convenience store clerk in Spartanburg, S.C. Moore has spent the past 19 years on death row. (South Carolina Department of Corrections via AP, File)

COLUMBIA, S.C. (AP) — The state of South Carolina has scheduled what could be its first execution in nearly a decade, but corrections officials say they don't have any lethal injection drugs to carry it out.

The State Supreme Court set a Dec. 4 execution date for Richard Bernard Moore, a 55-year-old man who has spent 19 years on death row after he was convicted of killing a convenience store clerk in Spartanburg.

The condemned man’s attorneys are seeking to stay the execution, citing the dangers of the coronavirus pandemic to those involved in the execution and its witnesses. They also say the corrections department is withholding information about its execution methods, preventing Moore from making an informed decision between dying by lethal injection or by electrocution, the two options provided by state law.

“South Carolina is set to carry out its first execution in nearly a decade under an unprecedented veil of secrecy in the midst of a global pandemic,” reads a statement by Justice 360, the nonprofit representing Moore.

“The South Carolina Department of Corrections refuses to release any information about how it intends to carry out the execution — from the type and source of lethal injection drugs to the status and testing of the electric chair — creating the risk of a torturous execution with no oversight.”

Though Moore's attorneys have sued the corrections agency in federal court to compel it to release such information, the department said in a September letter that it has been open about its lack of lethal injection drugs and that it cannot disclose details like the identities of execution team members or drug supplies.

The agency also said it was updating any preventative measures for COVID-19 during an execution.

Per state law, Moore has until 14 days prior to his execution date to choose between the two methods. If he doesn’t make a decision, the method defaults to lethal injection.

But the corrections department's last drugs expired in 2013, agency spokesperson Chrysti Shain confirmed Wednesday: “We have been actively pursing avenues to obtain the drugs necessary for lethal injection, but we do not have any.”

It’s a redux to 2017, when corrections officials said they could not carry out the execution order of Bobby Wayne Stone without the appropriate drugs. At the time, however, Stone had not yet exhausted his appeals in court.

Like other states, South Carolina has found it increasingly difficult to secure the drugs, as opponents of the death penalty have pressured manufacturers to stop providing them.

Prior attempts by the General Assembly to find alternatives and get back to regularly scheduling executions have stalled, though both Gov. Henry McMaster and Department of Corrections Director Bryan Stirling have pushed legislators to pass a law shielding the identities of drug manufacturers. Lawmakers have also contemplated a bill that would force inmates to the electric chair if lethal injection is not available.

Moore is one of 37 people, all men, on South Carolina’s death row. He exhausted his federal appeals earlier this month when the U.S. Supreme Court declined to take up his case. Prosecutors have said Moore killed James Mahoney in 1999 while robbing a convenience store.

South Carolina's last execution was in 2011, when Jeffrey Motts, on death row for strangling a cellmate while serving a life sentence for another murder, abandoned his appeals and opted for the death chamber.

This story corrects the spelling of the first name of the Corrections Department spokeswoman to Chrysti, not Christi.