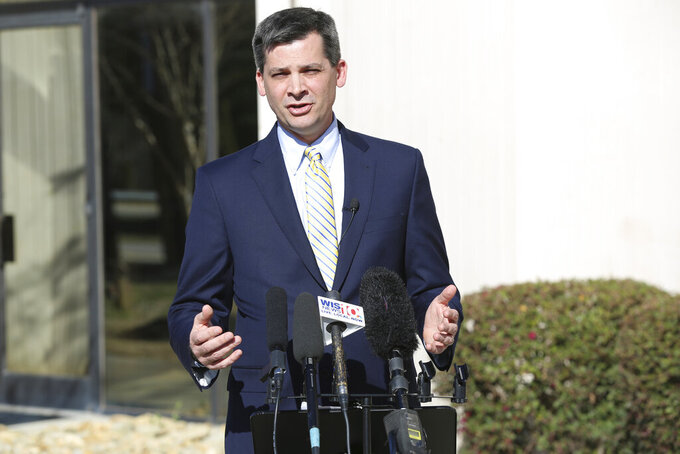 South Carolina Senate Majority Leader Shane Massey, R-Edgefield, talks about his proposal to sell two state-owned airplanes on Friday, March 5, 2021, in West Columbia, S.C. Massey said he has never been on the state plane and thinks selling them is the only way to prevent lawmakers from using them for improper trips. (AP Photo/Jeffrey Collins)

COLUMBIA, S.C. (AP) — South Carolina senators approved a bill Wednesday that would end the terms of the five members of the State Election Commission, force the state's elections director to resign and allow the Senate to approve who takes over those roles.

Senate Majority Leader Shane Massey said the goal is to make the Election Commission like the state board over health and environment, where senators get a say in who runs the board and the agency. The Senate also gets to confirm or reject a number of the governor's cabinet appointments.

“If there is not this direct continual oversight, they do things they wouldn’t do otherwise,” said Massey, a Republican from Edgefield.

A spokesman for the governor called the bill a power grab that would invite political interference in elections.

In the wake of the 2020 elections, there is skepticism about any changes in how elections are run and, specifically, any changes to an agency that was structured to be independent when it was created more than 50 years ago.

”Maybe that was originally the reason — to keep legislative influence out of the process that elects the people who serve in this General Assembly," said Sen. Nikki Setzler, a Democrat from West Columbia.

The bill was approved 37-7 with only Democrats opposed. It needs a routine vote before it will be sent to the House next week.

If the bill becomes law, the five members of the State Election Board would be kicked off. The governor could reappoint them, but they would have to be approved by the Senate. The new board would then choose an executive director, who would also need Senate approval.

Whether the House would allow the Senate to expand its power remains to be seen. The House passed its own election reform law that would require uniform rules for all 46 counties. Some counties verify voter signatures on absentee ballots and some don’t. Some give absentee voters a chance to correct their ballots if they don’t follow the exact rules, like forgetting to sign it.

The Senate bill does not contain that provision. Massey said he would consider it as the two bills work through the other chamber.

“The Senate bill flatly ignores the problem and invites unneeded and unwarranted outside political interference. That’s not reform, it’s a power grab. And it’s a non-starter,” Symmes said in a statement.

Other proposals that would make bigger changes to election laws have not been considered in South Carolina this year.

State Election Commission spokesman Chris Whitmire said the agency is not taking a position on the Senate bill.

A few senators asked Massey if his support of the bill was prompted by problems with Election Commission Director Marci Andino, who has run the agency for 18 years.

Massey and other Senate and House leaders were unhappy Andino didn't tell them last year about lawsuits over access to voting and the process amid the COVID-19 pandemic. The Senate bill would explicitly allow legislative leaders to intervene in lawsuits.

Andino received wide praise from a number of state leaders on how smoothly voting went in both the primaries and general election during the pandemic.

Massey insisted several times his issues were procedural on who gets to approve the leadership of a state agency and not a personality problem. He said he would consider Andino if his bill passes and a new board wants her to stay.

“I've had concerns with her,” Massey said. “You go through the process and see what happens.”