Spain, Morocco square off after 8,000 migrants arrive by sea 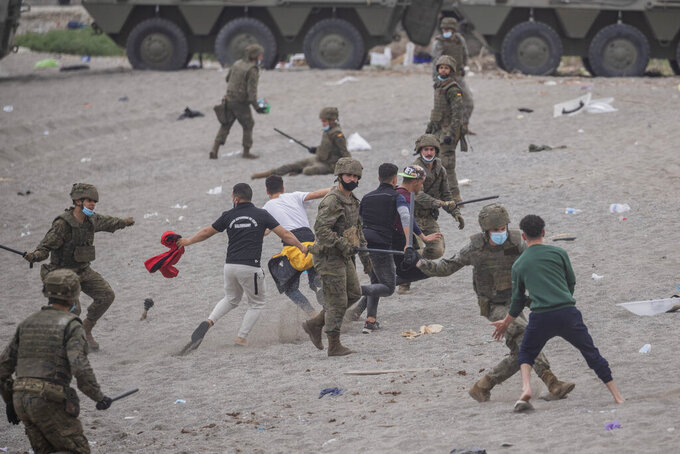 Spanish Army soldiers clash with migrants near the border of Morocco and Spain, at the Spanish enclave of Ceuta, on Tuesday, May 18, 2021. Ceuta, a Spanish city of 85,000 in northern Africa, faces a humanitarian crisis after thousands of Moroccans took advantage of relaxed border control in their country to swim or paddle in inflatable boats into European soil. (AP Photo/Bernat Armangue)

CEUTA, Spain (AP) — Spain deployed its military to the Moroccan border Tuesday and expelled nearly half of the thousands of migrants who jumped fences or swam onto European soil over two days after Rabat loosened border controls amid a deepening diplomatic spat.

Overwhelmed soldiers separated the adults from the young and carried children in their arms while Red Cross workers helped an endless trickle of migrants who were emerging from the water shivering and exhausted. One unconscious woman laid on the sand before she was carried away on a stretcher.

The sudden influx of migrants has fueled the diplomatic spat between Rabat and Madrid over the disputed Western Sahara region and created a humanitarian crisis for Ceuta, the Spanish city of 85,000 in North Africa on the Mediterranean Sea, separated from Morocco by a double-wide, 10-meter (32-feet) fence.

Amina Farkani, a 31-year-old Moroccan woman who commuted to jobs in Ceuta for 18 years until foreign workers were banned from entering when coronavirus outbreaks began to surge last year, said she saw an opportunity to go back to work when she heard that police were not controlling the border.

“They let people pass and stand there without speaking,” Farkani told The Associated Press. “People just pass and pass and pass.”

Farkani was among the thousands of migrants who were sent back to Morocco. AP reporters saw Spanish military personnel and police officers ushering both adults and children through a gate in the border fence. Some tried to resist and were pushed and chased by soldiers who used batons to hasten them.

Interior Minister Fernando Grande-Marlaska denied that unaccompanied migrants under 18, who are allowed to remain legally under the tutelage of Spanish authorities, were being deported.

Spanish Prime Minister Pedro Sánchez canceled a trip to Paris, where he was to attend a summit on international aid to Africa, and flew by helicopter to Ceuta. While calling Morocco a “friend of Spain," Sánchez also urged authorities to “respect the shared border.”

A senior Moroccan Foreign Ministry official said the government had recalled its ambassador to Spain for consultations. The official wasn't authorized to be identified by name in media reports.

By Tuesday afternoon, nearly 8,000 sea-soaked people had crossed the border into the city since early Monday, the Spanish government said, including some 2,000 thought to be teenagers. The number getting in slowed after Spain deployed additional police officers and soldiers, but the arrivals didn't stop even when anti-riot police on the Moroccan side dispersed crowds of people hoping to cross over.

At least 4,000 were returned to Morocco, according to Spain's Interior Ministry. Morocco and Spain signed an agreement three decades ago to expel all those who swim across the border.

Yet many arriving Tuesday were sub-Saharan Africans who often migrate to flee poverty or violence at home. Spain has agreements to return some of those migrants to their native countries, but not all of them.

One young man drowned and dozens were treated for hypothermia or small injuries, the Red Cross in Ceuta said, adding that it was performing coronavirus tests on the new arrivals. The adults were being transferred to Ceuta’s main soccer stadium, while those thought to be minors were sent to warehouses run by charity groups.

Neither the government in Rabat nor local officials have commented about the mass influx or responded to queries by The Associated Press.

“It’s such a strong invasion that we are not able to calculate the number of people that have entered,” said Juan Jesús Vivas, the president of Ceuta, an autonomous city of about 20 square kilometers (7.7 square miles).

“The army is at the border in a deterrent role, but there are great quantities of people on the Moroccan side waiting to enter,” he told Cadena SER radio.

Four Spanish armored vehicles parked Tuesday at Tarajal beach in Ceuta, where the border fence leads to a short breakwater. Some people also rushed up the hills surrounding the city and jumped over the fences.

In a video shared by a Spanish police union urging authorities to send in reinforcements, anti-riot officers behind the border fence were using shields to protect themselves from stones being thrown by people in Morocco.

The European Union’s top migration official – Home Affairs Commissioner Ylva Johansson – described the incidents as “worrying” and called on Morocco to prevent people from setting out in the first place.

“The most important thing now is that Morocco continues to commit to prevent irregular departures, and that those who do not have the right to stay are orderly and effectively returned,” Johansson told the European Parliament.

“Spanish borders are European borders. The European Union wants to build a relationship with Morocco based on trust and shared commitments. Migration is a key element,” she said.

Morocco's loosened border watch came after Spain decided to grant entry for medical treatment to the chief of a militant group that fights Morocco for the independence of Western Sahara. Morocco annexed the sprawling region on the west coast of Africa in 1975.

Morocco’s Foreign Ministry has said Madrid’s move to assist Brahim Ghali, head of the Polisario Front, was “inconsistent with the spirit of partnership and good neighborliness” and vowed there would be “consequences.”

Vivas, Ceuta's conservative regional president, said residents were in a state of “anguish, concern and fear" and 60% of the city's children had not shown up for school on Tuesday. He also linked the sudden mass arrival to Spain's compassionate assistance to Ghali.

The Spanish government officially rejects the notion that Morocco is punishing Spain for a humanitarian move. Foreign Minister Arancha González Laya summoned Morocco's ambassador, however, to express the government’s “disgust” and to communicate that Spain rejected “the massive entry of Moroccan immigrants.”

Sánchez appeared on live television to announce he would visit Ceuta and that his top priority was to ensure safety in the city “in the face of any challenge, any eventuality and under any circumstance.”

Over the decades, Spain has built a close relationship with Morocco to crack down on illegal border crossings but also to increase economic exchanges and fight extremism. Sánchez on Tuesday avoided any direct criticism to Rabat in his speech.

“To be effective,” he said, “that cooperation must always be based on respect — respect for the shared border.''

The prime minister also faced a political storm at home. The far-right Vox party blamed the migration crisis on the government's “inaction" and sending its leader on a quick visit to Ceuta.

Many African migrants regard Ceuta and nearby Melilla, another Spanish territory, as a gateway into Europe. In 2020, 2,228 chose to cross into the two enclaves by sea or land, often risking injuries or death.

On Tuesday, another 80 African migrants reached Melilla, 350 kilometers (218 miles) east of Ceuta, by jumping over the enclave’s double fence.