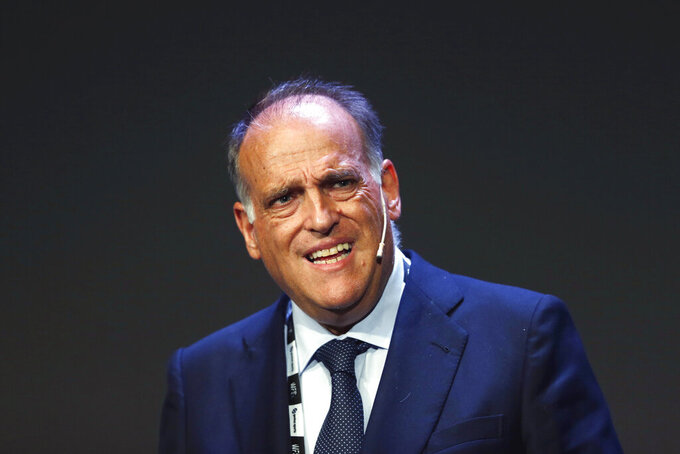 MADRID (AP) — Spanish league president Javier Tebas is not expecting any blockbuster signings in the next transfer window as Spanish clubs continue to struggle financially because of the coronavirus pandemic.

There has been talk of Real Madrid making a move to try to sign in Kylian Mbappé from Paris Saint-Germain or Erling Haaland from Borussia Dortmund, but Tebas said such transfers are unlikely to happen at this point.

“Considering the numbers people are talking about, I see it as complicated,” Tebas said on Tuesday. “Real Madrid, which is the club most linked with Mbappé… I think it would probably wait (for the end of his contract) to sign him, that’s the reality.”

He said only clubs such as PSG and Manchester City, which Tebas often accuses of breaking financial fair play rules, could afford these types of players.

“I don’t see other teams making these signing unless they use some form of financial trickery,” he said.

Tebas said the Spanish league should not be afraid of losing some of its top players, either — even Lionel Messi if he decides to leave Barcelona at the end of his contract this season.

“We always want to have the best players,” Tebas said. “It’s obvious that it can hurt us if we lose (Messi), but I believe we are ready for these circumstances. Neymar left us and Cristiano Ronaldo left us and we still did well. If the bids for audiovisual rights are used as a thermometer, we could still do very well despite the departure of these players.”

Tebas said he hopes to have fans back in Spanish stadiums by the end of the season but it will depend on how the coronavirus pandemic progresses in the country.

“I believe we still have to go through March and April before we can start to think about having fans at the end of the season, at least in the last games,” he said.

Tebas said Barcelona should be able to start overcoming its crisis after it elects a president on Sunday, and that Real Betis has until September to adjust to the league's salary cap. New caps were announced on Tuesday, with most clubs seeing their caps reduced with the exception of Real Madrid, Celta Vigo, Granada and Huesca.