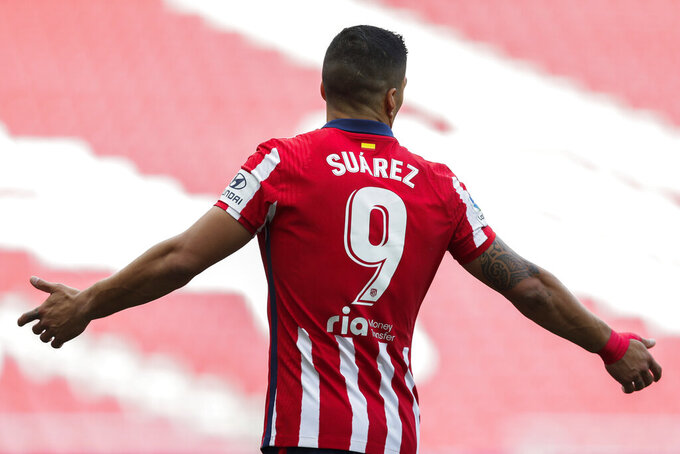 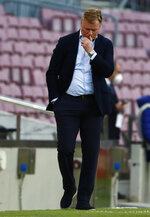 BARCELONA, Spain (AP) — Two of Spain's most modest stadiums are set to offer scenes of joy and sorrow on Saturday.

Atlético Madrid can ensure it clinches its first Spanish league title in seven years with a win at Valladolid, while Lionel Messi and Ronald Koeman could participate in their last game for Barcelona when they visit the already relegated Eibar.

Atlético enters the final round of the competition with a two-point lead over defending champion Real Madrid.

If Diego Simeone’s side fails to win at Valladolid, Madrid can retain its title by beating Villarreal. Madrid holds the tiebreaker advantage with Atlético in case they finish level on points.

In a provincial city 190 kilometers (118 miles) north of Madrid, Valladolid needs a victory at its José Zorrilla Stadium to have a chance of avoiding relegation.

Elche and Huesca are also fighting with Valladolid to not go down, with two of the three clubs destined for the drop.

For Valladolid defender Kiki Olivas, his team’s desperation could be what it needs to pull off the upset.

“We still have a chance and that is why we must fight until the end,” Olivas said. “We have to forget everything else and face the match with the belief that we can pull it off regardless of the difficulty. Atlético Madrid has something important to play for, but this is our stadium and we have more at stake than they do.”

Olivas will be tasked with helping defend Luis Suárez, whose late goal last weekend secured a 2-1 comeback win over Osasuna that kept Atlético at the top of the standings and in control of its fate.

Atlético will face the finale without its most-used center back, Stefan Savic, who will serve a one-game suspension for accumulation of yellow cards. José Giménez, who has been hit by injuries and a bout with COVID-19 this season, will likely take his place.

Besides needing Valladolid to at least draw with Atlético, Madrid must beat a Villarreal side that has played well all season but may be looking ahead to an even more important game.

Villarreal will face Manchester United in the Europa League final on Wednesday in Gdansk, Poland, aiming to win the first major title in club history. If it beats the English powerhouse, it will also qualify for the Champions League.

In the Spanish league, Villarreal is currently in seventh place, a spot that earns a berth for next season’s new Europa Conference League.

But a win over Madrid could allow it to move up into the Europa League spots. Real Sociedad and Real Betis are hoping to lock up those berths with finishes in fifth- and sixth-place with respective wins at Osasuna and Celta Vigo.

“Our most important game is always the next one up,” Villarreal coach Unai Emery said. “The Spanish league has always been our focus and qualifying for European competition for the coming season our main goal.”

Barcelona bowed out of the title fight last round. Its match at Eibar's Ipurúa Stadium will likely be a sad final appearance for its coach and maybe even its greatest player of all time.

The days of Koeman appear to be numbered after his team’s poor finish and with president Joan Laporta pledging that he will overhaul the team this offseason.

It could also be the last time that Messi plays for Barcelona. The 33-year-old Argentina forward has given no indication what his plans are when his contract expires on June 30. The match will be number 779 for Messi in a Barcelona shirt.

Barcelona’s only interest in the outcome is maintaining third place, which Sevilla could snatch from the Catalan club with a victory over Alavés.

So, a two-decade-long partnership that has taken Messi and Barcelona to the heights of world soccer could finish at a tiny stadium in northern Spain, with practically nothing to play for, and nobody to cheer.