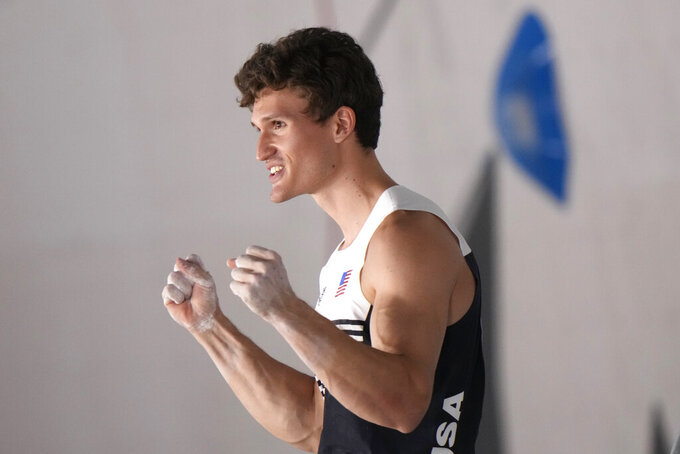 Nathaniel Coleman, of the United States, celebrates after reaching the top during the bouldering portion of the men's sport climbing final at the 2020 Summer Olympics, Thursday, Aug. 5, 2021, in Tokyo, Japan. (AP Photo/Jeff Roberson)

TOKYO (AP) — Nerves once were Alberto Ginés Lopéz's biggest obstacle on the climbing wall. Didn't matter if he was in the finals or well down the standings, the fear of climbing in front of other people left him locked up.

The Spanish teenager not only overcame those jitters, he conquered the world's best climbers on the sport's biggest stage.

At ease in front of a worldwide audience, Ginés Lopéz won the first Olympic gold medal in sport climbing, riding a victory in the speed discipline to the top of the podium Thursday at the Tokyo Games.

“My head hasn’t worked so well to start the season, but I was working with a specialist, and I think now it's working better,” Ginés Lopéz said.

Ginés Lopéz struggled when climbing in front of even 100 people when he was younger and still had stage fright into this World Cup season. The 18-year-old sought help from a coach to soothe himself on the wall, and it's paid off.

He qualified sixth in Tokyo and quickly put himself into the lead by winning the speed event. He then showed off his all-around skills by finishing seventh in lead and fourth in bouldering. He had 30 points — the finishes are multiplied together — to edge Nathaniel Coleman of the United States by two.

“Two years ago, I was quite bad on speed and I worked a lot on it with my team,” Ginés Lopéz said. “Here I was bit lucky but was able to win it.”

Coleman came to Tokyo hoping to make the finals in the sport's first Olympics. The 24-year-old from Salt Lake City did more than that, winning bouldering by topping three of the four “problems.” He also was fifth in lead and sixth in speed, finishing just short of gold.

“Getting into finals, it didn't feel for real for a long time,” he said. “I put a lot of effort in resetting my mind and believe a good performance was possible.”

Jakob Schubert of Austria had the climb of the night, becoming the first man or woman to reach the top of the 15-meter lead wall in three days of competition. His climb moved him into the bronze medal spot and knocked Czech climber Adam Ondra off the podium.

“It kind of came out of nowhere,” Schubert said. “Out of speed and boulder, I was in such a bad position. I knew even with a first place in lead, there was only a small chance to medal. Everything went so fast after that.”

Climbing made the transition from chill outdoor vibe to competitive sport in the 1990s and took a huge step forward in 2007 with the formation of the International Federation of Sport Climbing.

The World Cup circuit expanded the sport’s popularity, as did the increase in recreational gyms around the world.

Climbing exploded the last several years with the social media prowess of the top climbers, a TV deal with ESPN and the success of Free Solo, a documentary of Alex Honnold’s rope-free climb of Yosemite’s El Capitan.

The culmination put elite climbers in position to reach for the Olympic rings.

Sport climbing was added to the Tokyo Games along with skateboarding, karate, 3-on-3 basketball and surfing in an effort to draw younger generations.

But with the inclusion came an exception: speed climbing was part of the program.

The IOC is handing out two medals in climbing — one for men and women — and wanted something fast-twitch to catch people’s attention, so speed was included.

The decision rankled lead and boulder climbers; speed is a more specialized discipline and will have its own medals at the 2024 Paris Olympics.

The key for the lead and boulder specialists would be to offset low scores in speed with high ones, even a first in one or both of the other two disciplines.

Ondra, considered the best climber in the world, has called speed a circus show and didn’t seem too worried about his results in the finals in Tokyo. He laughed after losing to Ginés Lopéz after getting a bye in the first round and was ecstatic after losing to Mickael Mawem because he set a personal best of 6.68 seconds to finish fourth.

Ondra had a difficult time on the boulder walls after topping the first problem, but had the top score in lead until Schubert's climb.

Ginés Lopéz used his speed climbing prowess to his advantage, winning the final race over Tomoa Narasaki of Japan with a run of 6.42 seconds up the 15-meter wall dotted with standardized holds. The teen who used to struggle with his nerves kept his composure over the next two disciplines, walking away with gold.

“Even when I knew I couldn’t win the comp, I was messing up,” Ginés Lopéz said. “Today, I didn't worry about that too much.”