Sport climbing's Olympic debut will have a surprise element 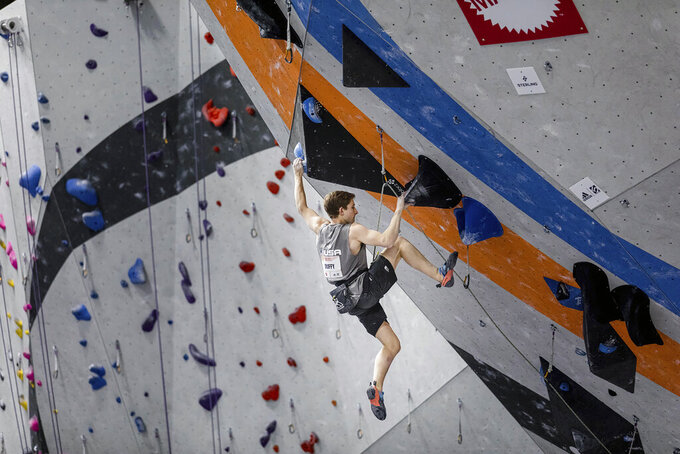 TOKYO (AP) — Sport climbing’s Olympic debut will have an element of surprise.

The key to the sport is strength, particularly in the fingers and arms, but there’s also a degree of problem-solving involved.

So to keep the playing field (or wall) level, climbers won’t get a chance to see the wall in two of the three disciplines until right before their first attempt.

“Probably the most difficult thing for non-climbers to understand is how we can look at this spray of holds that look random and kind of know what we’re supposed to do,” American climber Nathaniel Coleman said. “But it’s all pattern recognition and intuition, I guess.”

Speed is a race to the top of a 15-meter wall on a standardized route.

The inclusion of speed has been a bit controversial because it takes a different skillset than the other two disciplines. The Tokyo Games only has two medals for climbing — it will be four at the 2024 Paris Games — and the IOC wanted something a little more eye-catching to go with the methodical other disciplines, so speed was included.

Since speed is the same every time, there’s no need to keep the wall a secret.

Part of the challenge in lead and bouldering is figuring out the best route to the top, so those walls will be kept under wraps until competition day.

No training or warmups on the walls as in other sports. Show up and figure it out on sight.

“In bouldering, when you turn around you have five minutes to come up with a solution, a best guess, and then also climb it,” Coleman said. “Throughout that five minutes, you might realize that your first intuition wasn’t correct."

Part of what will make climbing unique is the collaborative effort of the competitors.

When the climbers get a chance to look at the wall, many will hash it out with their fellow competitors, pointing up and discussing the best way to reach the top.

After that, they’re on their own.

Climbers are escorted to an isolation room after the observation period so they don’t get an advantage by watching the others make their way up the walls.

“Those athletes who are more creative and intuitive and can improvise quite well are typically the best at this,” said U.S. assistant coach and national team manager Meg Coyne.

For the climbers who reach the final, there will be a new challenge the next day.

The wall won’t change, but the holds will be swapped out, likely for harder ones.