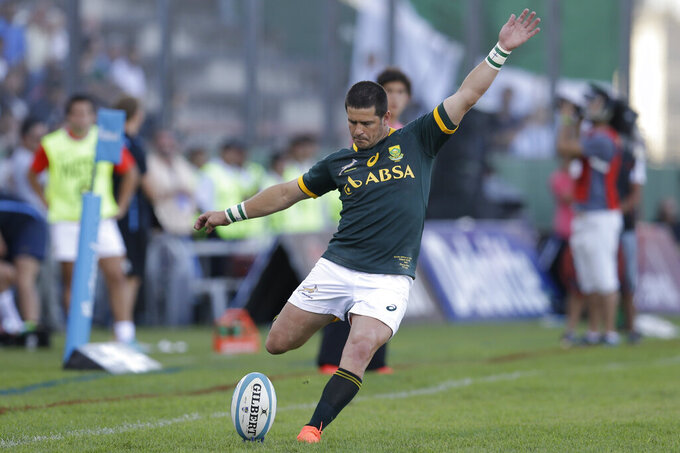 FILE - In this Saturday, Aug. 23, 2014 file photo, South Africa's Morne Steyn kicks to score on a penalty against Argentina during a Rugby Championship match in Salta, Argentina. South Africa has recalled flyhalf Morne Steyn to a 46-man initial squad for the British and Irish Lions series starting next month. The 36-year-old Steyn hasn’t played a test in five years. (AP Photo/Victor R. Caivano)

CAPE TOWN, South Africa (AP) — Morne Steyn may get a second chance to break the hearts of the British and Irish Lions.

South Africa recalled the 36-year-old flyhalf on Saturday to a 46-man initial squad for the Lions series, 12 years after his last-gasp penalty won an epic 2009 contest between the teams.

Steyn hasn't played a test in five years but has been "the most consistent” No. 10 in South African domestic rugby this year, Springboks coach Jacques Nienaber said at the squad announcement.

Handre Pollard is still South Africa's first-choice flyhalf but Steyn has been pushing hard after returning to domestic rugby following a spell in France.

Crucially for the Springboks, they also have 14 of the 15 men who started and won the Rugby World Cup final against England in November 2019 back in their squad. Only prop Tendai Mtawarira, who has retired, is missing. All but three of the entire 2019 World Cup squad return to duty.

Incredibly, that World Cup final in Tokyo was South Africa's last test as the coronavirus pandemic and a long and strict lockdown ruined their schedule last year.

“We’ve been really hungry to play,” said director of rugby Rassie Erasmus, who has moved upstairs after coaching the Boks to World Cup glory two years ago.

Nienaber, Erasmus' assistant at the World Cup, was named head coach in January 2020 but hasn't yet led the team in a test. This was his first squad after more than a year in the job, although he knows most of the players well having been part of the coaching staff since 2018.

“If you look at the squad, there is a lot of experience there,” Nienaber said.

There was one serious doubt for the Boks, however, after experienced No. 8 Duane Vermeulen, man of the match in the World Cup final, injured his left ankle playing in the Pro14 Rainbow Cup on Friday night. Erasmus said Vermeulen, who was named in the squad, needs a scan.

“Duane is a big worry for us,” Erasmus said. “It looked bad.”

While the Springboks will rely on the core of their World Cup-winning group, there were eight uncapped players in the squad, which will also provide the players for the South Africa A vs. Lions tour game.

Those uncapped players included hooker Joseph Dweba, lock Nicolaas Janse van Rensburg and loose forward Jasper Wiese, who all play for European clubs and are relatively unknown. The most exciting newcomer might be fullback Aphelele Fassi, who is highly-rated.

Nienaber and Erasmus, who work as a team on selection, also added twin brothers Jean-Luc and Dan du Preez of Sale Sharks to further beef up an already hefty forward pack.

Morne Steyn is one of two survivors of the 2009 Lions series in the squad. The other, utility back Frans Steyn, continues an international career that began with a 2006 debut for the Boks at the age of 19.

The Springboks and Lions will play three tests, one in Cape Town and two in Johannesburg, in July and August. The Lions will also play five games against South African domestic teams before the tests.

The tour is almost certain to be played without any fans and sadly robbed of a central part of its tradition because of the virus, unless the government has a late change of heart and eases a ban on spectators at major sports events.

South Africa will warm up with two home tests against Georgia on July 2 and July 9 before the first test against the Lions on July 24.