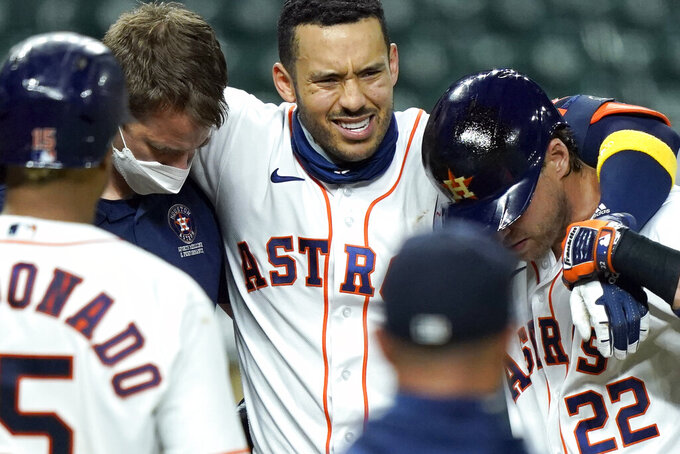 Houston Astros' Carlos Correa, center, is helped off the field after fouling a pitch off his leg during the sixth inning of a baseball game against the Texas Rangers Tuesday, Sept. 15, 2020, in Houston. (AP Photo/David J. Phillip)

HOUSTON (AP) — George Springer and Martín Maldonado homered, Alex Bregman hit a go-ahead two-run single in the seventh inning and the Houston Astros got a needed 4-1 win over the Texas Rangers on Tuesday night.

The Astros, who are two games ahead of Seattle for second place in the AL West with the top two teams ensured a postseason spot, opened a six-game homestand after dropping 9 of 11 games on their recent road trip.

“That was a good step in the right direction," Bregman said. “We need to start a good streak of playing well. We haven’t had the best last week or two weeks, so hopefully we can build on this."

Their victory was tempered by an injury to shortstop Carlos Correa, who had to be helped off the field after fouling a ball off his left ankle. X-rays were negative and manager Dusty Baker said that he had a bone bruise on his left ankle. The team should know more about his status on Wednesday.

Houston starter José Urquidy (1-1) allowed three hits and one run in seven innings for his first win in his third start of the season. He missed the first six weeks of the season after being diagnosed with COVID-19.

Ryan Pressly allowed one hit in a scoreless ninth for his 10th save.

The game was tied with no outs in the seventh inning when Nick Goody (0-1) allowed a double to Maldonado before walking Springer and Jose Altuve to load the bases and end his night. Jonathan Hernández took over and Michael Brantley grounded into a force out that left Maldonado out at home.

Bregman then singled on a ball that dropped near the left field corner to send two runs home and put the Astros up 3-1. Altuve, who was activated from the injured list before the game after sitting out since Sept. 4 with a sprained right knee, looked speedy on the play, almost catching up to Springer as the two dashed home.

Baker was relieved to see the Astros break through in the seventh after leaving several runners stranded earlier in the game.

The Rangers managed just four hits, all singles, and fell to 4-18 on the road. They have lost seven straight road games, their longest such streak since also losing seven in a row in 2014.

The Astros took an early lead when Springer hit his third leadoff homer of the season. Houston loaded the bases with no outs in the second inning with singles by Kyle Tucker and Yuli Gurriel and a walk by Correa. But they came away empty when Josh Reddick grounded into a double play before starter Kyle Cody retired Maldonado to end the inning.

Urquidy retired his first 13 batters with five strikeouts before Nick Solak singled with one out in the fifth inning. Rougned Odor singled after that before a single by Ronald Guzmán with two outs scored Solak to tie it at 1.

Cody allowed four hits and one run with two walks in three innings in his sixth appearance and third start of the season.

Manager Chris Woodward believes Cody is growing as he gets more experience.

“I don’t want him to struggle, but he hasn’t had much adversity to this point as a major leaguer," Woodward said. “So to see that bases-loaded jam or even the homer to start the game, (I wanted) to see if that would snowball, but he dialed it back in and got three outs.”

Maldonado’s homer came with two outs in the eighth inning to extend the lead to 4-1.

Rangers: OF Willie Calhoun was activated from the 10-day injured list before the game. He has been out since straining his left hamstring on Aug. 19.

Astros: RHP Justin Verlander (right forearm strain) will throw to hitters Wednesday for the first time since he was injured. The right-hander, who hasn’t pitched since the season opener on July 24, is scheduled to throw 50-60 pitches against a handful of the team’s reserve players.

ONE IS THE LONELIEST NUMBER

Tuesday was the ninth time the Rangers have scored just one run this season, which leads the American League and is tied with Milwaukee and Pittsburgh for most in the majors.

Houston’s Lance McCullers Jr. (3-2, 5.79 ERA) will return from the injured list to oppose right-hander Kyle Gibson (1-5, 6.14) when the series continues Wednesday night. Gibson is 0-3 with an 8.10 ERA and has allowed eight homers in his last five starts. McCullers has been out since Sept. 6 with nerve irritation in his neck.