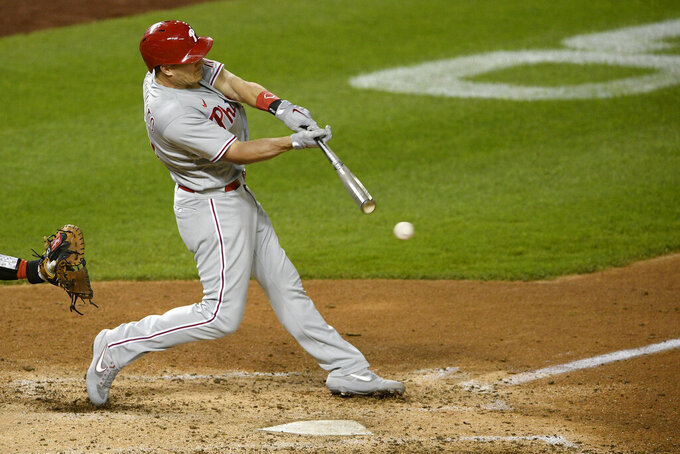 Those six players have until 5 p.m. on Nov. 11 to accept the offers or press ahead as free agents, who could start negotiating contracts with all teams on Sunday night.

They are the only ones subject to compensation among the 181 players who became free agents in a market that also includes pitcher Masahiro Tanaka, outfielder Marcell Ozuna, shortstop Didi Gregorius and designated hitter Nelson Cruz.

A brutal market is expected, with many teams likely to cut payrolls following a regular season played with no fans in the seats due to the novel coronavirus pandemic.

If a team makes a qualifying offer to a player who signs a major league contract with another club before the June amateur draft, his former club would receive a draft pick as compensation at the end of the first round or at the end of competitive balance round B. The placement depends on whether the new contract is worth $50 million or more and the revenue-sharing and luxury tax status of the team losing the player.

Stanton is owed $218 million for seven seasons and Martinez $38.75 million for two years.

Stanton hit .250 with four homers and 11 RBIs in the pandemic-shortened 2020 season, limited to 23 games by a left hamstring strain that sidelined him from Aug. 9 to Sept. 15. He rebounded to become the Yankees’ best offensive player in the playoffs, hitting .308 (8 for 26) with six homers and 13 RBIs in seven games.

Reliever Dellin Betances exercised his $6 million player option with the Mets, deciding against taking a $3 million buyout and becoming a free agent. A 6-foot-8 right-hander who turns 33 on March 23, Betances signed with the Mets last December for a deal that guaranteed $10.5 million. A four-time All-Star during seven seasons with the New York Yankees, Betances slumped to a 7.71 ERA in 15 relief appearances with the Mets, walking 12 and striking out 11 in 11 2/3 innings.

Houston exercised an option on left-hander Brooks Raley calling for a $2 million salary in the major leagues and a $250,000 salary in the minors, and San Diego declined a $3 million option on first baseman Mitch Moreland, which calls for a $500,000 buyout.

Raley was 0-1 with a 3.94 ERA and one save in 17 relief appearances and pitched scoreless relief in five of six playoff appearances. He entered with a tie score in Game 3 of the Division Series against Oakland and allowed a pair of sacrifice flies in a 9-7 loss.