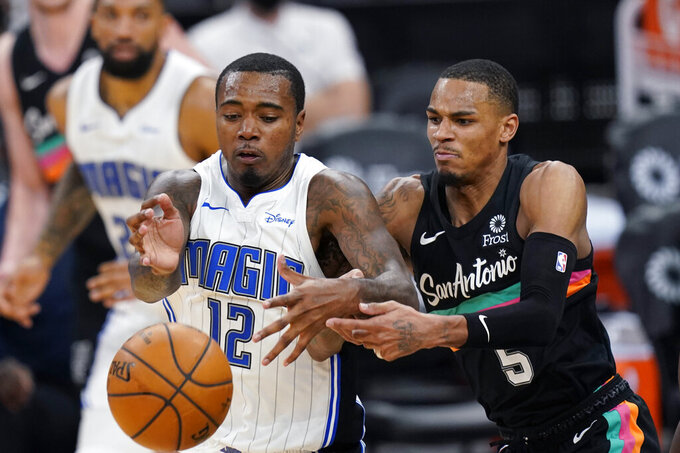 SAN ANTONIO (AP) — San Antonio played its first home game with fans and welcomed back four players who sat almost a month due to COVID-19 protocols. Basketball life is starting to return to normal for the Spurs even as they face more change.

Rudy Gay had 19 points, Dejounte Murray and Derrick White each added 17 and theSpurs overcame a sluggish start to beat the short-handed Orlando Magic 104-77 on Friday night.

“We just picked it up,” White said. “Started with Patty (Mills) and Dejounte (defensively). Those two really set the tone for us and we all just rallied behind them.”

The Spurs opened the AT&T Center to the public for the first time since beating Dallas on March 10, 2020, the day before the league shutdown operations due to COVID-19. Seating was limited to 3,200.

“It’s awesome,” White said about the fans. “We feed off their energy. They helped us out when we started off a little slow.”

Nikola Vucevic had 26 points and nine rebounds for the Magic in their seventh straight loss. They had seven players out with injury or illness.

“Part of it tonight was we had nine guys play big minutes,” Vucevic said. “They were just pressing us, getting to the ball. It wasn’t easy.”

Gay and White, along with Keldon Johnson and Devin Vassell, all were forced to sit out due to the league’s health and safety protocols after contracting or coming in contact with COVID-19. Johnson returned March 2, Gay and White were back Wednesday and Vassell returned against Orlando. The quartet combined for 55 points on 20-for-36 shooting.

“To be honest with you, in Dallas, I was a little bit more excited than I was out of breath,” Gay said. “Just being back on the court. The nerves were out of me with this game.”

While that quartet returned fully, San Antonio was without veterans DeMar DeRozan and LaMarcus Aldridge. DeRozan left the team to attend funeral services for his father, Frank, who died Feb. 19 after a prolonged illness. San Antonio is attempting to trade Aldridge after agreeing to part ways with the veteran forward after his role was lessened.

Dwayne Bacon finished with 15 points, shooting 3 for 8 on 3-pointers. Orlando, which was without Aaron Gordon, did not have any other player score in double figures.

“It’s hard,” Vucevic said. “We have players playing out of position.”

San Antonio closed the first half on a 14-2 run and took its first lead and extending it to 47-39 to close the second quarter. The Spurs scored the first six points of the second half to extend that run.

Orlando was held to 10 points in the second quarter, the 19th lowest output in any quarter by a San Antonio opponent under Popovich.

Spurs: Devin Vassell played for the first time since Feb. 14. The rookie forward was one of five players sidelined due to contracting or coming in contact with COVID-19. … San Antonio is 16-2 when leading by 10 points at any time in the game.

Spurs: At Philadelphia on Sunday.