Sri Lanka cricketers back on home soil for England tests 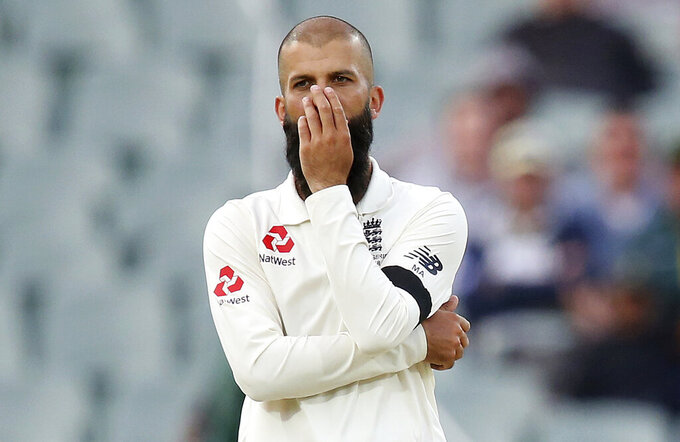 FILE - In this Dec. 2, 2017, file photo, England's Moeen Ali puts his hand over his face after bowling to an Australian batsman during their Ashes test match in Adelaide. Team allrounder Ali was isolating in Sri Lanka on Monday, Jan. 4, 2021, after testing positive for the coronavirus upon his arrival in the South Asian country for the team's two-test cricket tour. (AP Photo/Rick Rycroft, File)

GALLE, Sri Lanka (AP) — Sri Lanka's cricketers will host a test series for the first time since the outbreak of the coronavirus 10 months ago when the team takes on England in the first match starting Thursday.

Sri Lanka has played just two tests during the pandemic and both were away — in South Africa around the turn of the year — while England hosted West Indies and Pakistan with the players confined to bio-secure bubbles.

The pandemic is still hitting athletes around the world, with England allrounder Moeen Ali missing the first test having tested positive for the coronavirus upon arrival in Sri Lanka.

Teammate Chris Woakes, who only started training on Tuesday, is also likely to skip the first test after being in isolation because he was in close contact with Moeen.

Adhering to COVID-19 protocols, like the ban on using saliva to shine the ball and how much contact the players can have on the field, is essential.

Elbow touches and fist bumps are encouraged but England captain Joe Root suggested his side would show restraint.

“I’m sure the medical staff will make sure the protocols are kept in place and that if there is anything that needs to be discussed before the game starts, then we are made very well aware of it,” he said.

“We’ll do as best we can to make sure we adhere to that.”

A Unesco-heritage Dutch fort in the backdrop of the stadium in Galle stands out at one of the most picturesque venues in the world. But the stadium, packed with England’s group of 'Barmy Army' fans when it toured here in 2018, will this time be empty.

“It’s a lovely ground, isn’t it?” Woakes said. “I was here on the last tour when we won 3-0 and I remember the Barmy Army traveled in high numbers. It’s a great place to play as an England cricketer because you get great support, the ground’s packed, there’s people sat on top of the fort.

“It’s going to look a lot different this week with no one around and no crowd, which is a shame. But we know everyone will be supporting us back home.”

England has not played a test since August and will not be as battle-hardened as the Sri Lankans, who are coming off a two-test series against South Africa -- albeit one they lost 2-0.

It is the start of a busy schedule on the subcontinent for Root’s side, which will head to India at the end of the month for a tour containing four tests.

Sri Lanka will be a good challenge for the spinners -- so crucial on the subcontinent — and Dom Bess is set for a major role this month, especially as Moeen will be sidelined in Galle.

“We know Dom has the ability and skills if it does start spinning quite quickly to take advantage of that. It’s a really good opportunity for him to show what he can do in these conditions,” Root said.

Root must also decide how often to use veteran pacemen Jimmy Anderson, 38, and Stuart Broad, 34, given the India series to come and the fact it will be a long year of cricket culminating in an Ashes tour Down Under.

Sri Lanka will be encouraged after batsman Angelo Mathews and paceman Nuwan Pradeep joined the squad. Dhananjaya de Silva (torn thigh) and Kasun Rajitha (groin) were ruled out of the series due to injuries they sustained in South Africa.