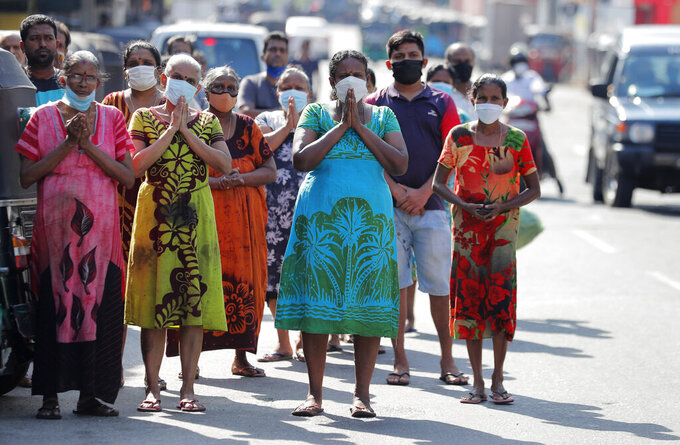 Sri Lankan Catholics pray outside St. Anthony's church, one of the sites of the 2019 Easter Sunday attacks, on the first anniversary of the deadly bombings in Colombo, Sri Lanka, Tuesday, April 21, 2020. Sri Lankans commemorated the anniversary of last year's Islamic State group-inspired Easter Sunday bomb attacks from their homes on Tuesday amid the coronavirus pandemic. More than 260 people were killed when three churches, two Catholic and one Protestant, came under simultaneous suicide bomb attacks during Easter celebrations on April 21, 2019. Three tourist hotels were also targeted, killing some 42 foreign nationals. (AP Photo/Eranga Jayawardena) 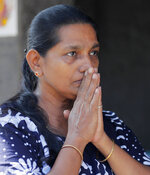 Public memorials organized to mark the anniversary were canceled amid a rise in coronavirus patients. Instead, church pastors were asked to ring bells and two minutes of silence were observed at 8:45 a.m., the time of the bombings.

Investigators concluded that two Muslim groups inspired by the Islamic State group were responsible for the attacks. The government of then President Maithripala Sirisena was blamed for ignoring near-specific intelligence received before the bombings.

“We are grateful to those friendly nations that generously shared the intelligence information prior to the attack on several occasions, which our political leaders unfortunately did not take seriously," said Cardinal Malcolm Ranjith, the archbishop of Colombo, Sri Lanka's capital.

The U.N. office in Sri Lanka stressed the need to relentlessly fight terrorism.

“Terrorism should not be associated with any religion, ethnicity or race," it said in a statement. “The purpose of terrorism is to inoculate societies with the virus of fear. Fear of the other, fear of differences, fear of dissenting opinions or different accents or clothing.”

U.S. Secretary of State Mike Pompeo said in a statement that “We stand in solidarity with the survivors of this brutality, and pray for their healing."

The police chief and the secretary to the defense ministry at the time of the attacks are facing legal action over their alleged negligence.

More than 100 suspects with alleged links to the masterminds of the attacks have been detained by police.

Police earlier this month arrested the brother of a former Cabinet minister and a lawyer for alleged links to the suicide bombers.

The government partially lifted a monthlong curfew on Monday, with the top health official declaring that the coronavirus is “under control.” The Indian Ocean island nation had been under a 24-hour curfew since March 20. The curfew will remain in effect from 8 p.m. until 5 a.m. until further notice. Sri Lanka has 310 confirmed cases of the virus, including seven deaths.