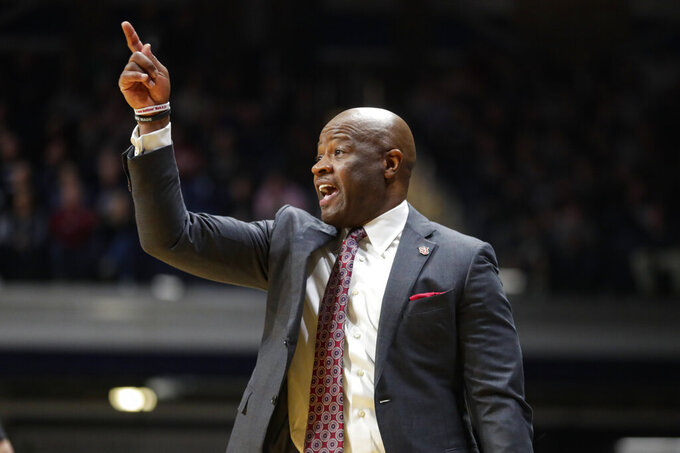 FILE - St. John's coach Mike Anderson gestures during the first half of the team's NCAA college basketball game against Butler in Indianapolis, in this Wednesday, March 4, 2020, file photo. Big East Conference coach of the year Mike Anderson of St. John's has been given a new six-year contract through at least the 2026-27 season. The university announced the deal on Thursday, May 13, 2021, after seeing Anderson deliver consecutive winning seasons in his first two years. (AP Photo/Michael Conroy, File)

NEW YORK (AP) — St. John’s has given Big East Conference coach of the year Mike Anderson a six-year contract extension through the 2026-27 season.

The university announced the deal on Thursday after Anderson delivered consecutive winning seasons in his first two years. Financial terms were not disclosed.

The Red Storm posted a 16-11 record this past season, including a 10-9 mark in the conference after being picked ninth in the preseason coaches poll. It marked the first time St. John's finished with a league record of .500 or better since 2014-15.

St. John’s did not receive an NCAA Tournament bid and removed itself from consideration for a probable bid to the NIT due to COVID-19 precautions.

“In my time at St. John’s, Coach Anderson and the men’s basketball program have represented our University in a first class manner on the court, in the classroom and in the community,” university president Father Brian Shanley said in a statement.

Anderson, who won his 400th career game this past season, is one of only three active Division I coaches with at least 15 years of experience to have never had a sub-.500 season.

Anderson thanked the university, his staff and players.

“Their faith in our vision for St. John’s Basketball is humbling and I greatly look forward to carrying on our program’s tradition of success for many years to come,” he said.

Anderson is the first St. John’s coach to receive the Big East's coach of the year award in three decades. The season also saw sophomore Julian Champagnie named the league's most improved player and Posh Alexander named the freshman of the year and defensive player of the year.

St. John's was 17-15 in Anderson's first season and had the Red Storm in position for a postseason berth before the season was abruptly ended by the COVID-19 pandemic.

Entering his 20th year as a head coach, Anderson owns a 402-226 career record. He has led his teams to 12 postseason appearances, including nine trips to the NCAA Tournament.