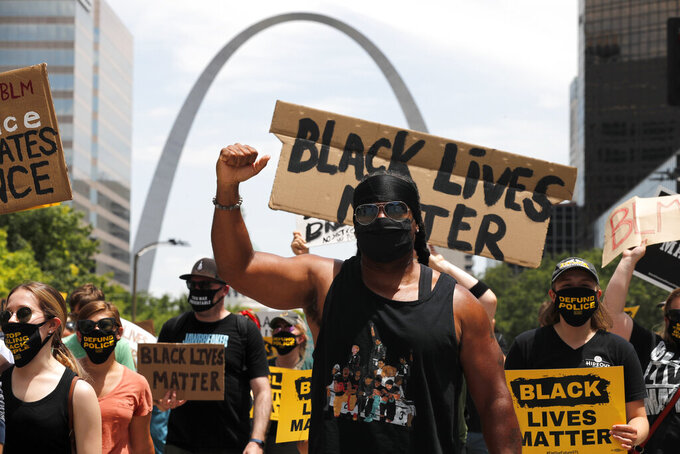 People march in the street to mark Juneteenth, Friday, June 19, 2020, in St. Louis. Juneteenth marks the day in 1865 when federal troops arrived in Galveston, Texas, to take control of the state and ensure all enslaved people be freed, more than two years after the Emancipation Proclamation. (AP Photo/Jeff Roberson) 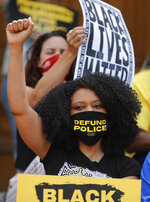 ST. LOUIS (AP) — A march Friday commemorating Juneteenth in St. Louis began at the most appropriate of places —- the Old Courthouse where Dred Scott’s case played out, a legal setback that galvanized efforts to free the slaves.

Dred Scott filed suit seeking freedom for himself and his wife, Harriet. The case eventually went to the U.S. Supreme Court, which decided in 1857 that no African Americans were entitled to citizenship. Though a defeat for the Scotts, the decision “hastened the Civil War, which ultimately led to freedom for the enslaved people of the United States,” according to the Gateway Arch National Park’s website.

Marchers walked through stifling heat to St. Louis City Hall, where they issued a list of demands that included defunding police and closing a notoriously overcrowded and unsanitary jail. Many held signs with such messages as “Black Lives Matter” and “No Justice, No Peace.” A small African American boy, marching with his mom, held a sign that read, “Am I next?”

While the Emancipation Proclamation freed slaves in the South in 1863, it wasn’t enforced in many places until after the end of the Civil War two years later. Confederate soldiers surrendered in April 1865, but word didn’t reach the last enslaved black people in Texas until June 19, 1865. The phrase Juneteenth combines the words “June” and “nineteenth.”

The Old Courthouse, now part of the Gateway Arch National Park, was the site of the case that ultimately led to freedom of the slaves.

The symbolism of the Old Courthouse wasn’t lost on those at the rally. Mercedes Jacobs, who is Black, wore a T-shirt that read “Free-ish since 1865.”

“I think this is an opportunity to embrace our history, certainly, but let’s change the history -- that’s our goal -- and move forward,” Jacobs said.

Others were more concerned about recent history, specifically instances of police brutality against blacks. Nora Cahill, 76, of University City, Missouri, who is white, believes the protests since Floyd’s death are leading to positive changes.

“I am so excited that not only the United States but people around the world are embracing the need to be respectful to everybody,” Cahill said.

Interest in Juneteenth is up dramatically on the other side of Missouri.

Makeda Peterson, program director for the Juneteenth program in Kansas City, told KCUR that her organization’s website has seen a 1,000% increase in traffic since the protests began.

The coronavirus pandemic is muting some celebrations amid ongoing concerns about social gatherings. Kansas City’s annual festival at the 18th & Vine Jazz District is being replaced by digital educational events, live-streamed performances and virtual workshops throughout June, Peterson told KCUR.