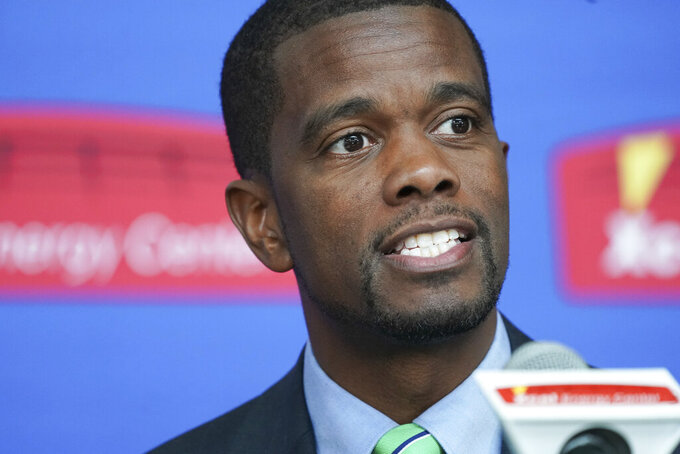 FILE - In this April 16, 2019, file photo, St. Paul Mayor Melvin Carter speaks in St. Paul, Minn. A pilot program proposed by Carter to guarantee $500 in monthly income to 150 low-income families affected by COVID-19 has hit a snag. The St. Paul City Council delayed a vote until at least next week after U.S. Rep. McCollum, a Democrat who represents the capital city, warned in a letter Wednesday, Sept. 9, 2020, that the proposal requires "careful design, implementation and oversight." (Glen Stubbe/Star Tribune via AP File)

MINNEAPOLIS (AP) — A pilot program proposed by St. Paul Mayor Melvin Carter to guarantee $500 in monthly income to 150 low-income families affected by COVID-19 has hit a snag, with an influential congressional liberal questioning whether the plan to use federal coronavirus aid is legal.

The St. Paul City Council delayed a vote until at least next week after U.S. Rep. Betty McCollum, a Democrat who represents the capital city, warned in a letter Wednesday that the proposal requires “careful design, implementation and oversight.”

McCollum wrote to the Democratic mayor and all-Democratic council that the city must make certain that the program won't violate laws on how the city can spend the money it is receiving under the federal CARES Act, and that the extra income won't make participants ineligible for existing aid programs such as food stamps and Medicaid.

“Without explicit federal approval, is the City prepared to take on costly litigation should the Trump administration challenge the legality of the pilot program?" she asked.

Carter told the Star Tribune of Minneapolis that the program passes legal muster.

"I look forward to providing the answers and moving forward on this next week,” he said.

City staffers told the council they were still answering some of the questions raised in McCollum’s letter, the newspaper reported.

The mayor created the People’s Prosperity Guaranteed Income Pilot by executive order last week. The $1.5 million program would be funded mostly by philanthropy, seeded with $300,000 in CARES Act funds. The 150 participating families would be selected at random from families already participating in a city program that helps low-income families save for college, and can demonstrate that they've suffered adverse financial consequences due to the pandemic. Eligibility would be limited to four of the city's lowest income and most racially diverse ZIP codes.

John Phelan, an economist with the conservative think tank Center of the American Experiment, dismissed the guaranteed income proposal as “simply higher welfare spending with a snappy new name.”

Carter's plan is shaped after an initiative by the mayor of Stockton, California, that has been giving 125 residents $500 per month since February 2019. A program in Jackson, Mississippi, is giving $1,000 per month to Black mothers. Chicago; Newark, New Jersey; Atlanta and Milwaukee are among several other cities considering similar pilot programs.

The idea of guaranteed incomes to alleviate poverty is being promoted by Mayors for a Guaranteed Income, a coalition of 25 mayors that often cites a quote by the Rev. Martin Luther King Jr.: “The solution to poverty is to abolish it directly by a now widely discussed measure: the guaranteed income."

The first data last year from Stockton's experiment showed participants spent most of their $500 monthly payments on necessities such as food, clothing and utility bills, not frivolities, drugs or alcohol.