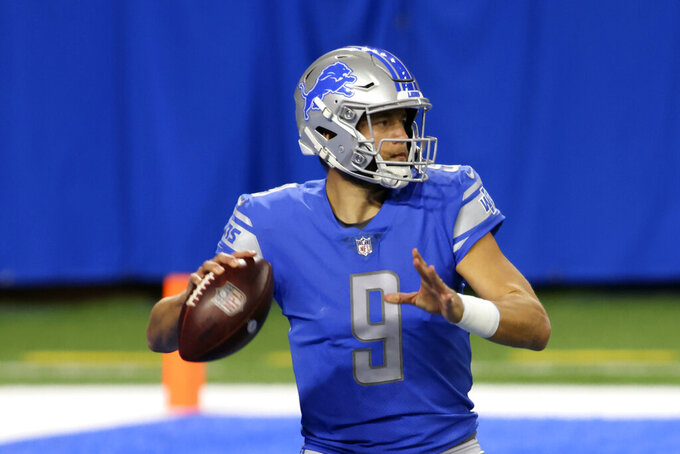 Detroit Lions quarterback Matthew Stafford throws during the first half of an NFL football game against the Indianapolis Colts, Sunday, Nov. 1, 2020, in Detroit. (AP Photo/Tony Ding)

It was the second straight day the team gave a player the designation. The Reserve/COVID-19 list was created for players who either test positive or have been in close contact with an infected person.

The Lions announced Stafford’s status on Wednesday after finishing practice. Earlier in the day, coach Matt Patricia said there was no requirement to shut down the team’s training facility. Some NFL teams have closed their training centers after players and or staff members tested positive for COVID-19.

“There’s no need for any of that, as far as our situation,” Patricia said a couple hours before leading practice. “I can’t speak to the future.

“Everybody across the country, especially in Michigan right now, with the cases going up, really no one knows what the next day is going to look like. We just have to do the best we can to stay safe."

The Lions put linebacker Jarrad Davis on the list Tuesday.

Stafford's backups are Chase Daniel and David Blough. The 34-year-old Daniel has started five games in his career. Blough started five games last year with the Lions after they acquired the undrafted rookie from the Cleveland Browns.

Three months ago, the Lions removed Stafford from the COVID-19 list after saying he received a false positive test result. The news received a lot of attention due to his stature in the league and because his wife had surgery last year to remove a brain tumor.

Kelly Stafford had plenty to say on her Instagram page in August after the false positive test, lashing out at the league for publicly putting her husband on the list.