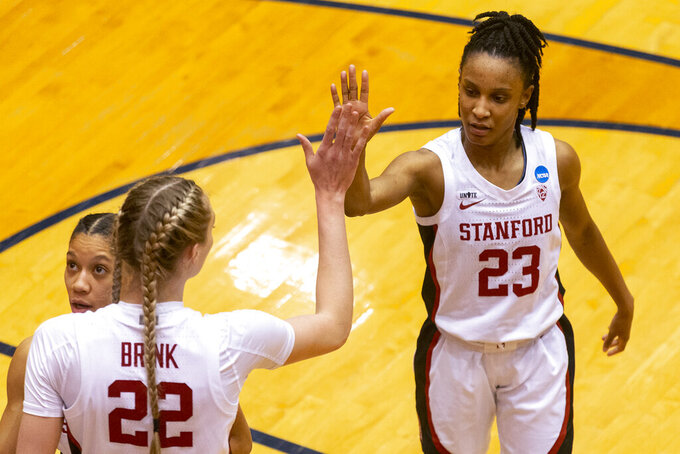 Stanford guard Kiana Williams (23) celebrates scoring against Oklahoma State with forward Cameron Brink (22) during the second half of a college basketball game in the second round of the NCAA women's tournament at the UTSA Convocation Center in San Antonio on Tuesday, March 23, 2021. (AP Photo/Stephen Spillman)

STANFORD, Calif. (AP) — When Stanford arrived for practice at a high school gym one afternoon in January and the lights were off, Kiana Williams couldn't help but wonder if her team had now seen just about everything during this strangest of seasons.

High winds in a town outside Santa Cruz, California, one of the temporary home bases for the Cardinal earlier this year, had caused a power outage. So Stanford adjusted — as it had done for nearly two months already at that stage — changed up the practice plan and held the entire adjusted workout with minimal light.

No problem, the Cardinal could just laugh it off.

These women were beyond used to such challenges by that point. In late November, Santa Clara County established COVID-19 health and safety protocols prohibiting practices and competitions. Those restrictions remained in effect for nine weeks — so the Cardinal hit the road.

“I'm like, ‘How bad can things get, how much worse can things get?’" Williams recalled of that tough stretch, which included the team's lone two losses. "We had just lost, we were practicing in a high school gym, the floor is slippery, the lights are off, I'm like, ‘What else is going to be thrown at us?’ We got through all that and here we are.”

Where they are is the Elite Eight, with the Cardinal as confident as ever after living as nomads for two months.

When the ban on sports came down, Hall of Fame coach Tara VanDerveer initially relocated her team to Las Vegas and scrambled to schedule new games after others were postponed or canceled altogether. She had one key connection that came in handy for games and practice space: former player and recent Stanford assistant Lindy La Rocque had just become head coach at UNLV.

In all, Stanford spent nearly 10 weeks away from campus and covered thousands of miles to make this season happen. The overall top-seeded Cardinal (28-2) played their season opener Nov. 25 at home in Maples Pavilion, had the next two scheduled games on campus canceled, then didn't play on their home floor again until hosting Colorado on Feb. 5.

That meant hotel living and learning, Zoom overloads and makeshift study tables for one. Typical team meals were rare, too.

If any team in this year's tournament field felt prepared for an extended stay in San Antonio, Stanford sure did.

“We’re better prepared and we know what to expect because we did it for 10 weeks,” Williams said. “No other team had to go through that.”

One thought VanDerveer regularly reminds her team is, “Every disappointment is a blessing.” It's one of her “Tara-isms” as her players call the coach's signature catch phrases.

“I just learned how mentally tough everyone is. It was exhausting and draining at times just to go straight from practice back to the hotel then have to watch your Zoom class in the hotel in isolation," Williams said. “... It takes a special individual to get through that.”

There were days nobody felt like practicing. Not to mention finding the motivation to study on top if it.

Even months before their road adventure, players worked out on Stanford’s outdoor tennis courts before they were allowed to safely return to Maples Pavilion during the pandemic.

“I think the term resilience is so appropriate when you consider the journey this team has been on these last few months,” Stanford athletic director Bernard Muir said. “Tara, her staff and the team have made the best of any situation regardless of the obstacles and have remained solely focused on how can they can stay together, support each other and improve with the ultimate goal of playing the next game ... and hopefully, many thereafter.”

Players got through it by checking in on each other every day. Some dealt with it all better than others. No matter what, they stuck together.

There were group texts and other ways to stay connected. Now, there's an NCAA ping-pong tournament to pass some time and help alleviate the tournament pressure.

“Those were some really challenging times and I think it brought the best out of us," Williams said. “We had some good days, we had some bad days but I think mentally we’re just a lot stronger than we probably would have been had we not gone through those 10 weeks on the road.

"Looking back on it it’s something we wouldn’t have chose to have done but I’m glad we got through it because I think we had that advantage here in San Antonio.”

Along the way, VanDerveer became the winningest women's basketball coach all-time, passing the late Pat Summitt. This season, her 35th on The Farm, has pushed her like none other as Stanford chases the program's first championship since 1992.

“With the travel, with COVID, with the stress of all that, we’ve adapted,” VanDerveer said. “We’ve had to be flexible with what we do."

VanDerveer hopes her team's experience being adaptable leads to three more wins and another title.

“They want to play together, they want to keep it going,” she said. “The teams that go the furthest are ones that just don't want it to end.”