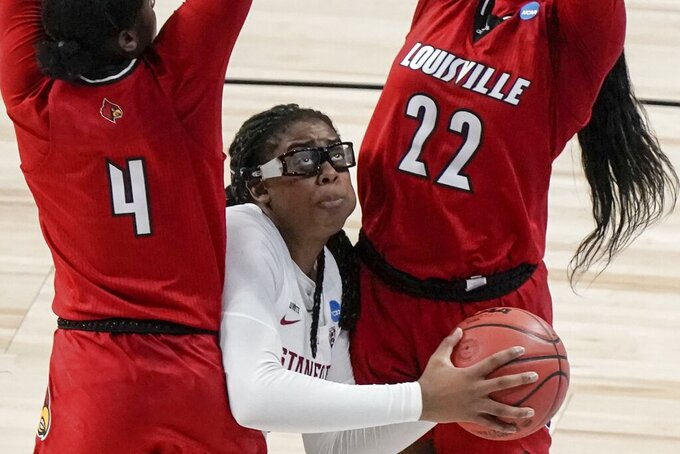 Stanford's Francesca Belibi looks to shoot between Louisville's Elizabeth Balogun and Elizabeth Dixon during the first half of an NCAA college basketball game in the Elite Eight round of the Women's NCAA tournament Tuesday, March 30, 2021, at the Alamodome in San Antonio. (AP Photo/Morry Gash)

SAN ANTONIO (AP) — Lexie Hull scored 21 points and Stanford reached the Final Four by rallying for a 78-63 victory over Louisville on Tuesday night.

Next up for the top-seeded Cardinal is South Carolina on Friday night in a rematch of the 2017 national semifinals. Stanford dropped that one 62-53, ending its previous appearance in the Final Four. UConn and Arizona meet in the other national semifinal.

Stanford (29-2) trailed by 12 midway through the third quarter before scoring 13 consecutive points to take its first lead since early in the game. The teams traded baskets the rest of the period and No 2 seed Louisville (26-4) was up 50-48 heading into the final quarter.

The Cardinal scored the first 10 points of the fourth to go up 58-50. That run was capped by Kiana Williams' 3-pointer. The San Antonio native had a rough start to the game, missing 11 of her first 12 shots. She finally got going offensively, hitting four shots in a row to help Stanford build its lead.

Stanford was up 68-60 with just over 3 minutes left when Williams hit a step-back 3 that sealed the victory. She finished with 14 points.

The win moves the Cardinal one step closer to getting coach Tara VanDerveer her first national championship since 1992 and No. 3 overall. Now the Cardinal have reached a 14th Final Four.

The loss potentially ends the stellar collegiate career of All-America guard Dana Evans, who could decide to return next year since the NCAA awarded all players an extra year of eligibility this year because of the coronavirus pandemic. The senior guard scored 24 points for Louisville, but got little help on offense.

Louisville had been playing stifling defense the entire tournament. Coming into Tuesday night's game, the Cardinals were allowing a tournament-low 46 points a game and teams were shooting just 29.5% against them.

They held Stanford to just 26 points in the first half and led 38-26 thanks to some strong play from Evans, who had 10 points early.

Stanford missed eight of its nine 3-point attempts and was just 10 for 36 from the field (27.8%). Besides misfiring from outside, the Cardinal missed a lot of easy lay-ins as well.

The Cardinal got going in the second half and made six of their final eight 3-point attempts.

VanDerveer was among 12 people named to the FIBA Hall of Fame Class of 2020. The announcement of the class was delayed a year because of the coronavirus pandemic. VanDerveer helped lead the U.S. to a gold medal at the 1996 Atlanta Olympics. That started the current run the Americans are on of six consecutive gold medals at the Olympics. There will be a digital ceremony on June 18 to honor the Class of 2020, and the Class of 2021 which will be announced on Thursday.

STRONG OFF THE BENCH

Ashten Prechtel played a huge role off the bench for the Cardinal, hitting all six of her shots, including three 3-pointers. She finished with 16 points.