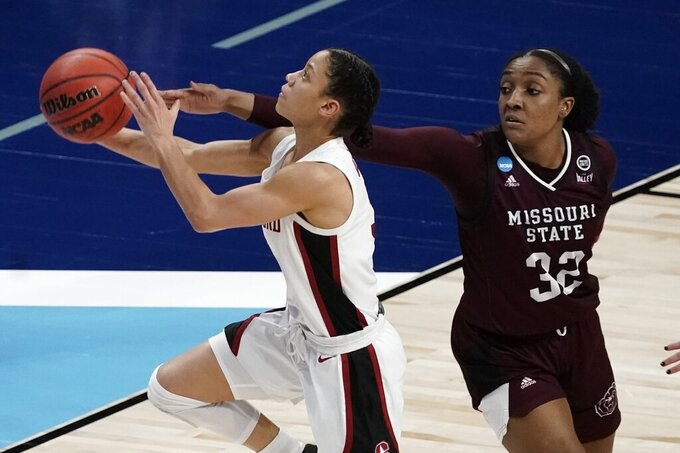 Stanford's Anna Wilson shoots past Missouri State's Jasmine Franklin during the second half of an NCAA college basketball game in the Sweet 16 round of the Women's NCAA tournament Sunday, March 28, 2021, at the Alamodome in San Antonio. (AP Photo/Morry Gash) 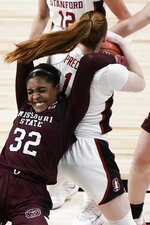 SAN ANTONIO (AP) — Missouri State had waited two years to get another crack at the Sweet 16 and Stanford, only to watch the Cardinal turn their rematch into a romp.

Hannah Jump scored 17 points off the bench and top seed Stanford strolled past the No. 5 Lady Bears 89-62 to earn a spot in the Elite Eight of the women's NCAA Tournament for the 21st time.

Stanford led by 23 at halftime and by as much as 38 in the fourth quarter as the Cardinal kept up their postseason barrage of 3-pointers by making 15.

The Cardinal (28-2) have made at least 13 from long range in each of their three tournament games. Jump led the way Sunday with five.

“We try to ride the hot hand,” said Kiana Williams, Stanford's career leader in 3-pointers who made four and scored 16 points. “It's hard to guard us because you can't just focus on one person.”

The tournament's overall No. 1 seed advanced to Tuesday's Alamo Region final against No. 2 Louisville, which beat No. 6 Oregon on Sunday night.

A win there would send Stanford to its 14th Final Four. Cardinal coach Tara VanDerveer has won two national championships, but none since 1992.

“I still don’t think we’re playing our best basketball yet,” guard Anna Wilson said. “We’re playing really well. We’re clicking and in a lot of different ways than usual. But I think that each player has a lot more to give to the team. ... I think that with the trajectory we’re going in, it will be good timing. We don’t want to peak too early."

Elle Ruffridge scored 18 points to lead Missouri State (23-3), a team with a history of punching above its status as a mid-major from the Missouri Valley Conference. The Lady Bears have two Final Four appearances of their own, but the last came two decades ago behind record scorer Jackie Stiles.

This Lady Bears team had a veteran lineup eager to improve upon its nine-point loss to Stanford two years ago. And Missouri State was hungry to push for even bigger things after the coronavirus pandemic canceled the 2020 tournament and abruptly ended a 26-4 season.

But hope of an upset quickly disappeared when Missouri State missed nine of its first 10 shots and struggled to deal with Stanford's height and length near the basket as the Cardinal frontcourt diverted shot after shot.

“Every game we’ve been down, we’ve always come back,” Missouri State coach Amaka Agugua-Hamilton said. “So, it was a little surprise that we just couldn’t get over the hump. ... Obviously, it's an emotional ending to a magical ride, you know?"

Jump closed the first quarter with consecutive 3-pointers. The Cardinal led by 14 late in the second before ending the half with a 9-2 run behind a steal and layup from Wilson, a 3-pointer by Williams and a wide-open shot by Jump in the final seconds for a 49-26 lead.

Stanford opened the third with two more 3-pointers by Cameron Brink and Williams as the lead stretched to 35 by the end of the quarter.

The only question left was whether Stanford's Francesa Belibi might try to dunk on a fast break early in the fourth, something she did in the regular season against California and UCLA. She hesitated slightly and opted for an easy layup instead.

Belibi's slams in December made her the first woman to dunk in a college game since former Baylor star Brittney Griner had a trio of dunks against Florida State in the second round of the 2013 NCAA Tournament.

“I think she’s comfortable dunking off the dribble,” VanDerveer said. “But I thought it was a good decision by her, not dunking.”

Williams tweaked an ankle late in the second-round win over Oklahoma State, but appeared to show no lingering effects Sunday. She easily slashed around several defenders for an early layup. She was 6-of-12 shooting and had four assists in 30 minutes on the court in a game she could have rested longer.

Missouri State shot 23% over the first three quarters and 12 offensive rebounds resulted in only 10 second-chance points as Stanford pulled away.