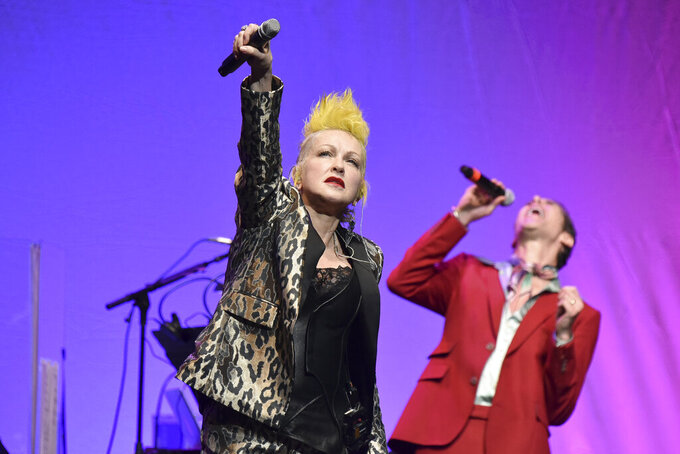 FILE - Cyndi Lauper, left, and Perry Farrell perform during the 9th annual "Home for the Holidays" benefit concert in Los Angeles on Dec. 10, 2019. Lauper’s annual concert to combat youth homelessness, an issue its organizer says has only gotten worse during the pandemic, will premiere on Friday on Lauper's TikTok channel at 8 p.m. EST, with an additional stream Sunday at 8 p.m. EST on Lauper’s YouTube and Facebook handles. This year’s concert will free to watch, with donation encouraged. (Photo by Richard Shotwell/Invision/AP, File)

“You can say ‘Stay home, protect yourself.’ What do you do if you’ve got no home?” Lauper told The Associated Press. “I think it’s time that we make sure all young people have access to lifesaving services without fear of violence or discrimination.”

Her Home for the Holidays benefit concert will premiere Friday on Lauper's TikTok channel at 8 p.m. EST, with an additional stream Sunday at 8 p.m. EST on Lauper’s YouTube and Facebook handles. This year’s concert will be free to watch, with donations encouraged.

Some celebrities will make appearances and others will perform. While organizers try to keep many details private, this year's show will have performances by Boy George, Parton, Cher, Browne, Lambert, Porter, Myers, Carlile, Shires & Isbell and King Princess, among others, including the cast of the musical “Kinky Boots,” which Lauper and Fierstein co-wrote.

Lauper, whose hits include “Girls Just Want to Have Fun” and “Time After Time,” started the nonprofit LGBTQ advocacy organization that would become True Colors United in 2008.

“We started True Colors 12 years ago on a tour bus,” Lauper said. “We never thought we would be here, but here we are in 2020,” a year she calls “a critical moment in history.”

Lauper pointed to statistics that show up to 40% of the 4.2 million youth experiencing homelessness in America are LGBTQ. In addition, a study by the University of Chicago found LGBTQ young people are 120% more likely to experience homelessness than non-LGBTQ youth.

“I just think that safe and stable housing is one of the best types of health care,” said Lauper. “It’s a global problem that really demands boldness and empathy from people.”

This year, True Colors United has partnered with the United Nations Human Rights Office for a campaign that includes an animated PSA, with voiceover by Lauper.

"Just the fact that an international organization as big as the U.N. actually sees and understands that LGBTQ plus homelessness is a real issue worldwide is huge,” she said.