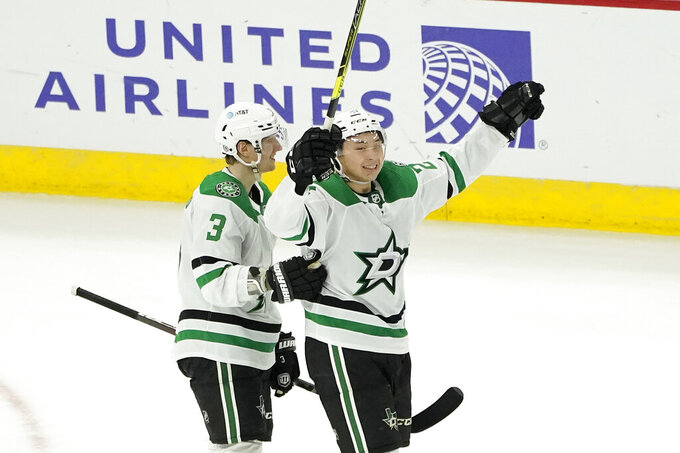 The Dallas Stars couldn't take their season into overtime after all of that extra time they played during the condensed schedule.

Only 7 1/2 months after finishing the NHL's first pandemic-affected season in the Stanley Cup Final inside the NHL bubble, the Stars missed the playoffs in the 56-game follow-up. They had an NHL-high 14 overtime/shootout losses — one-fourth of their games in a season that started a week late for them in January when about half the team tested positive for COVID-19. Their last 44 games were played over a 78-day stretch.

“It’s nothing you can really prepare for. Never seen a schedule like that or a season like that,” captain Jamie Benn said Tuesday. “We embraced it and did the best we could.”

Somewhat fittingly, the season ended with their 20th overtime game, a 5-4 win on rookie Jason Robertson’s goal on the second of consecutive nights playing at Chicago after being eliminated from playoff contention.

Had the Stars (23-19-14) won after regulation a few more times, especially against Nashville, they very likely would be in the postseason. They finished fifth in the Central Division, four points behind the Predators for the final playoff spot. The Preds had the tiebreaker with a 5-3 season series lead and all five wins came in extra time (three OTs, two shootouts).

“You have no idea what this team has been through for the last 11 weeks, four games every six nights and no break,” coach Rick Bowness said after the finale. ”This team has been competitive. It’s worked, it’s sacrificed. It’s exhausted.”

The Stars played more than 75 minutes of OT hockey, plus the eight shootouts, and an already-compact schedule got even tighter. Their expected season-opening four-game road trip was postponed by the mostly asymptomatic positive tests, then four consecutive home games in mid-February got pushed back because of extreme weather winter in North Texas that made their arena unavailable. They played their last seven games on the road.

And they did all that while missing key players.

“Some of these issues that we had, they’ll be fixed as soon as we get a healthy lineup,” Bowness said Tuesday. “They’re going to automatically be fixed without tinkering with anything. Just putting Segi and Rads in, and Bish back in the net, a lot of those problems go away.”

Seguin's first game May 3 came six months and a day after surgery to repair a torn labrum in his hip. The six-time All-Star scored a third-period goal to force overtime at Carolina, then scored in his second game, but played only once more before Dallas was knocked out of playoff contention.

Seguin said he has a lot more work to do this offseason, but was happy to get back on the ice at least for those few games.

“I got the foundation, I guess you could say, for my offseason," he said. “It was a pretty grueling four to six months of training and rehab, And I never got to really get into the last phase, which was explosive power, being able to jump with bodyweight or jog or run, things I haven’t done really in like a year now. So that’s kind of what my next four months, five months is looking like.”

Robertson was the team's second-leading scorer with 45 points (17 goals, 28 assists) behind 36-year-old forward Joe Pavelski's 51 points (25 goals, 26 assists), while rookie goalie Jake Oettinger was solid in a season when the Stars ideally would have had him playing in the AHL.

Oettinger made his unexpected NHL debut in the playoffs last summer when Bishop was hurt, and went 11-8-7 with a 2.36 goals against average and .911 save percentage while starting 24 of his 29 games this season.

Anton Khudobin got a $10 million, three-year deal to stay last offseason and was the primary goaltender this season after going 14-10 with a 2.69 GAA in the playoffs, He had never started a playoff game before then.

With Bishop expected to be fully ready for next season and with a no-trade clause, Khudobin (12-11-7, 2.54 GGA, .905 save percentage) will almost certainly be exposed in the NHL expansion draft and could be the player the Stars lose to the new Seattle Kraken.