Stars season already strange before virus, now shot at No. 1 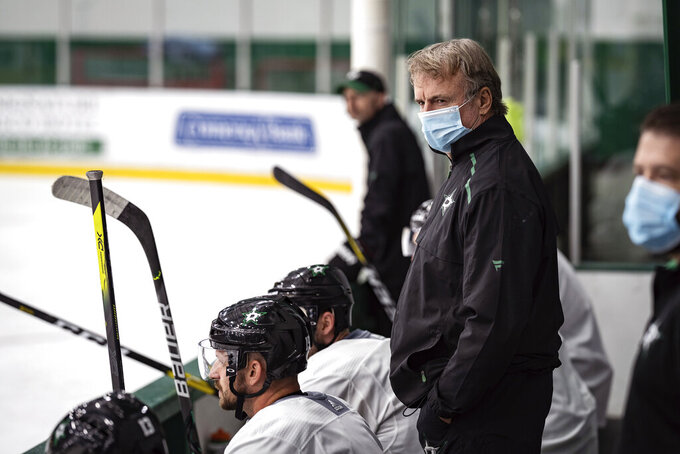 FILE -In this Tuesday, July 14, 2020, file photo, provided by the Dallas Stars NHL hockey team, interim head coach Rick Bowness watches practice in Frisco, Texas, The Stars have been mired in a six-game winless streak for more than four months, and now have a chance to be a No. 1 seed with the NHL going directly into the playoffs to resume its season. (Jeff Toates/Dallas Stars via AP, FIle)

FRISCO, Texas (AP) — The Dallas Stars still have a chance to be a No. 1 seed in the NHL playoffs even though they haven't won a game in five months.

That can only make sense in an unprecedented season like this, one that was paused in mid-March because of a pandemic. Now the NHL is going directly into the postseason without finishing its full 82-game regular season schedule, and the Stars went winless in the last six games they played.

“It’s definitely been a bizarre season in terms of everything that’s kind of happened,” veteran center Andrew Cogliano said. “We got out of it what we needed to do in terms of making the playoffs, and getting ourselves to this situation.”

This was a surreal season for the Stars long before the upheaval the coronavirus brought to sports and everyday life in March.

There was that miserable 1-7-1 start back in October for a veteran team coming off an encouraging playoff run. Then after the Stars were consistently winning again, there was an unexpected coaching change for issues off the ice. They were still on a pretty good roll until going 0-4-2 those last six games.

“I think we’re like every other team right now. Every team goes through ups and downs during the course of 69 games. Everyone’s fresh right now. Everyone’s rested,” interim head coach Rick Bowness said. “What’s happened in the first 69 games, you put behind you.”

Dallas is 20-13-5 since Bowness' promotion in December after second-year coach Jim Montgomery was fired and later went to alcohol rehabilitation. The 65-year-old Bowness has coached in a record 2,266 NHL games, 501 as a head coach, and has now been on a bench in five different decades.

As one of the top four teams in the Western Conference standings, the Stars (37-24-8) got an opening bye for the postseason play that begins Aug. 1. They instead will play St. Louis, Colorado and Vegas in a round-robin in Edmonton to determine the order of the top four playoff seeds.

“The break started and our season, I guess, ended at a pretty good time,” Stars captain Jamie Benn said. “It gave our group a chance to get healthy and rejuvenate."

Any playoff run will be pretty short if they play like they did to start or finish the truncated regular season.

“I think you’re going to see pretty close to playoff hockey as usual,” Benn said. “We’re all out there for the one reason, and that’s to try to win the Stanley Cup, and win series. So I think it’s going to be a lot different from the start of the year.”

The Stars, whose only Stanley Cup title came in 1999, won in the first round of the playoffs last season and then went to seven games in the Western Conference semifinals before losing in double overtime to the eventual Stanley Cup champion Blues.

Dallas had a comeback win over Nashville in an outdoors game at the Cotton Bowl stadium on New Year’s Day, when 85,630 fans made up the second-largest crowd ever to see an NHL game. That was in the middle of a six-game winning streak.

That six-game slump they have now been mired in for more than four months included consecutive shutout losses to the Predators.

“I don’t think the way we finished is in anyone’s mind,” forward Blake Comeau said. “We had a tough stretch to start this season and then we turned things around. And it just so happened that right before the break, we were going through a little bit of a tough stretch then.”

Before the Stars were able to get back on the ice together at their practice facility, Comeau was part of a group that worked out at Benn’s home, joining Tyler Seguin and goaltender Ben Bishop. And he saw a refreshed captain.

“Jamie brings so much more than just goals or assists. He’s our emotional leader in the locker room. He’s a guy that everybody looks up to. He’s got a respect from all of the guys,” Comeau said. “He’s more than just somebody who puts up goals. Obviously we need him to do that, along with Tyler, but he’s a huge part of our locker room.”